Those of you who have been to Lake Placid, New York, are familiar with the basics: it’s a small town in upstate New York that gains most of its revenue from tournament-based sports recreation play. This is the exact foot traffic and critical mass that increases sales tax revenue while supporting the local hotels and restaurants. CEO of Mohawk Valley Garden Robert Esche has similar aspirations for Utica, New York.

Unveiled on May 16 by Oneida County Executive Anthony J. Picente Jr., The U District encompasses the area beginning at The AUD and stretching East to Bagg’s Square and contains concepts for an American Craft Beer Museum and Innovation Center, Utica Commons Casino, Nexus Center and more. The vision creates a walkable epicenter for Arts, Sports and Entertainment and truly has options for everyone. 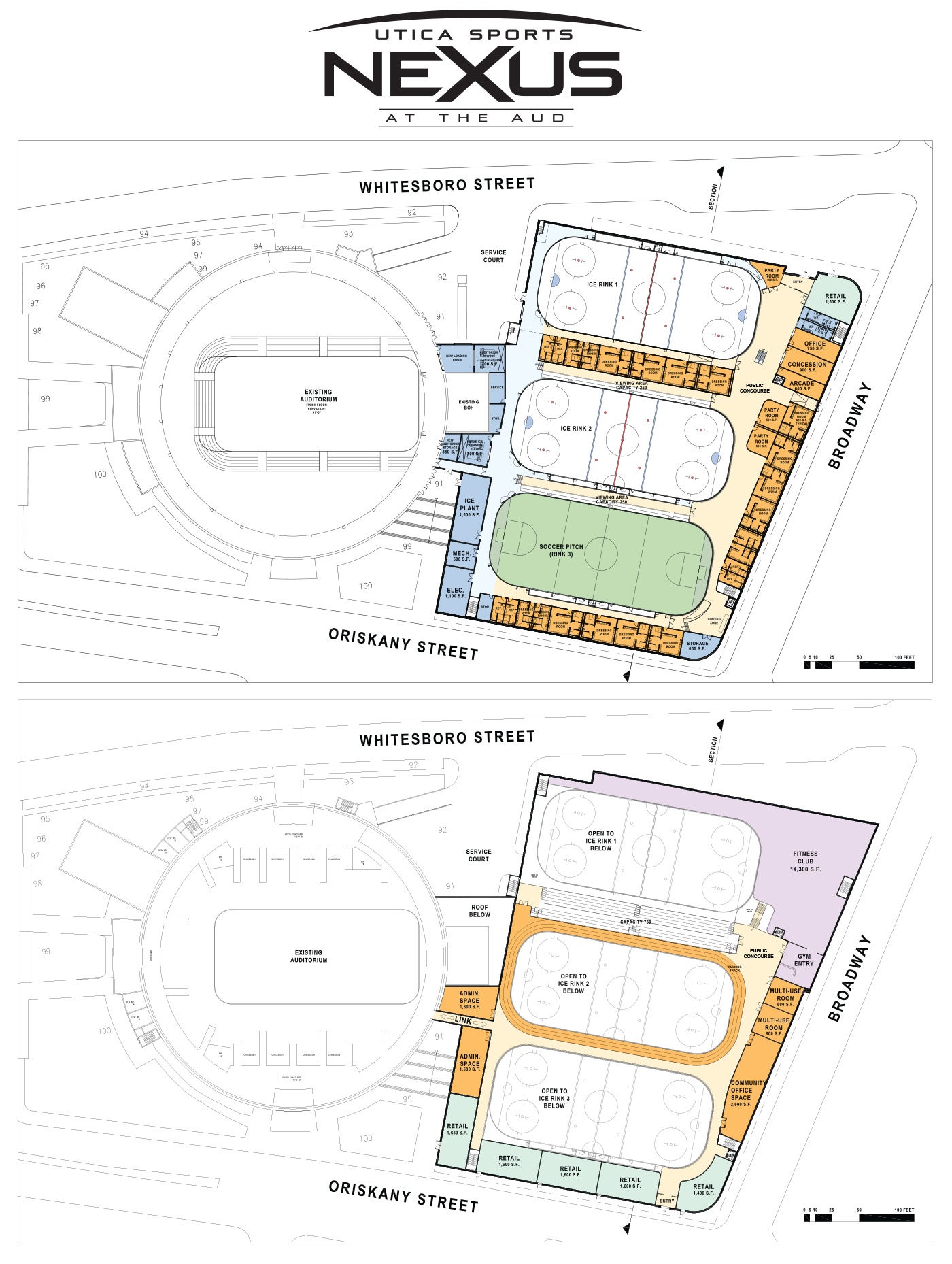 One of the highlights of The U District is the Nexus Center. Developed four years ago by Esche, the Nexus Center is a sports and recreation hub geared towards tournament-based recreation play. Nexus, meaning a series of connections, is what The U District can truly be – a connection of different businesses and entities that all share the common undercurrent of bringing people together.

Ever since last week's press conference, people in the Mohawk Valley and beyond cannot stop talking about The Nexus Center. The reason being is that it ties together an array of different interests and pastimes in prime location next to The AUD. With square footage space for three hockey rinks that can easily be transitioned to basketball courts, indoor soccer, lacrosse and rugby fields, The Nexus Center extends its reach to all seasons and all athletes.

The venue will be combined with a one-stop-shop for all sports and recreation activity in the Northeast, stretching from Toronto to New York City to Boston and more. Esche believes that the cards have aligned for The Nexus Center to be that focal facility with an ability to cater to a very specific economic driver in tournament-based sports recreation play, coupled with innovative convention and event space.

“With its leadership from Senator Joe Griffo, Assemblyman Anthony Brindisi, and Onedia County Exectuive Anthony Picente, Utica and the surrounding area is finally positioned to tackle the tourism industry as a whole,” Esche explained. “The bigger the dreams, the better, especially when turning these concepts into realities.”

And the concepts for The Nexus Center have taken into account just that; the bright future that is ahead for Utica, New York, and how to capitalize on its upward momentum. In this footprint, Nexus will have the ability to expand on its retail usage, as well as the ability to attract others. Moreover, conceptual and strategic planning endeavors are underway on how to not only maximize the space, but to also increase the square footage of the facility to include other sectors of sports and entertainment.

So why does The Nexus Center make sense in The U District? The answer is simple – foot traffic.

Much like the American Craft Beer Museum and Utica Commons Casino, Nexus projects hundreds of thousands of visitors passing through its doors annually. And when you combine the above facilities, The U District as a whole is expected to attract over 1.5 million patrons annually. When you take into account that each facility’s resources overlap into one another, it becomes an easy model to understand – a model that builds off of existing infrastructure to house an arts, sports, and entertainment district.

“With a sustainable business model already in place, it is imperative that we expedite and move forward in a manner conducive to success,” said Esche. “This is a project that can catapult us ahead of like markets, and put Utica on the map where it belongs.