As 2018 comes to a close let’s take a minute to look back on some of the biggest stories of the year. 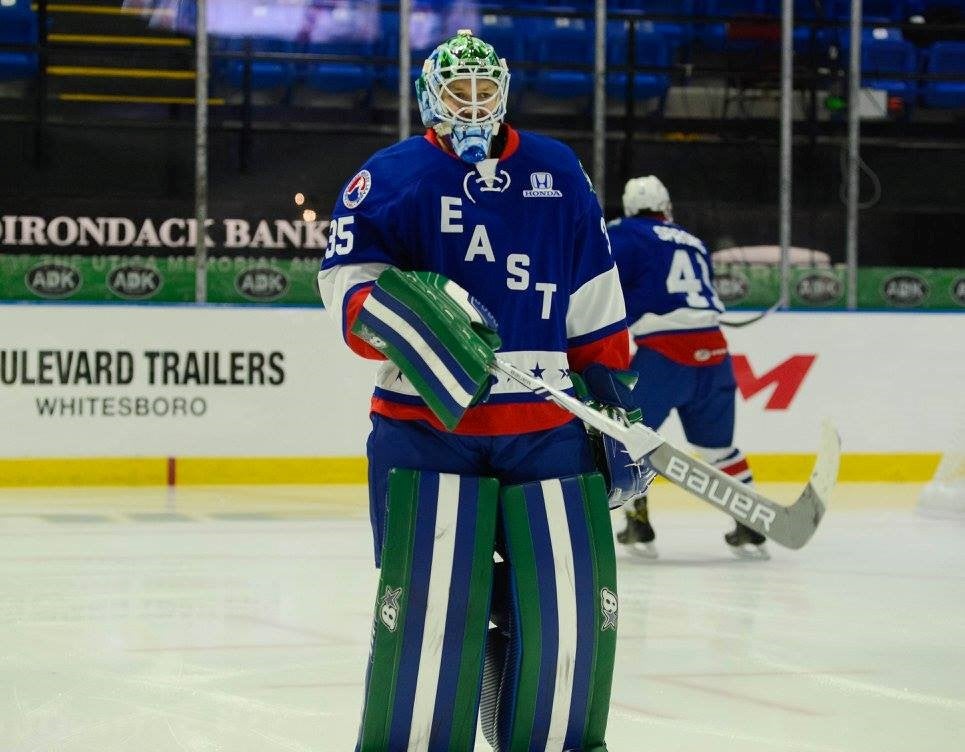 The second Save of the Day Foundation night was held on January 20. The players donned black and neon green jerseys that were raffled off to raise money for the Oneida County Sheriff’s Foundation.

The AHL All-Star Classic was hosted inside the newly renovated Adirondack Bank Center. Goaltender Thatcher Demko and forward Reid Boucher were named to the 2018 roster. Boucher finished with three goals in four games and Demko stopped 13 of 19 shots through four games, earning two wins in the process.

The Comets became the second AHL team to reach the milestone of 100 consecutive regular season sellouts, with a full capacity crowd.

In a white-hot January, Reid Boucher was named CCM/AHL January Player of the Month. Boucher, the first Comet to ever earn the honors, tallied nine goals and six assists to lead all AHL skaters with 15 points in 11 games during January. 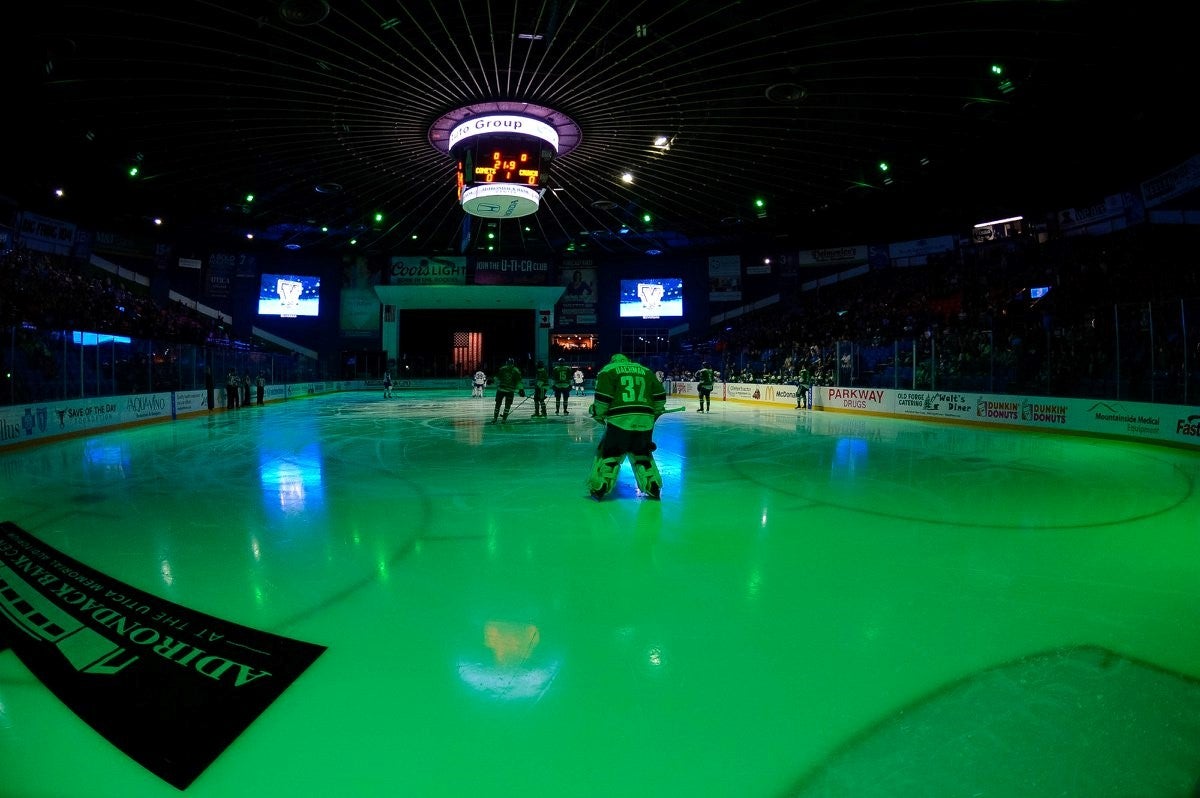 The hot start to the year continued into the second month with a 16-game point streak. The streak ended with a loss to the Lehigh Valley Phantoms. Before the loss the Comets had an 8-game point streak at the Adirondack Bank Center. 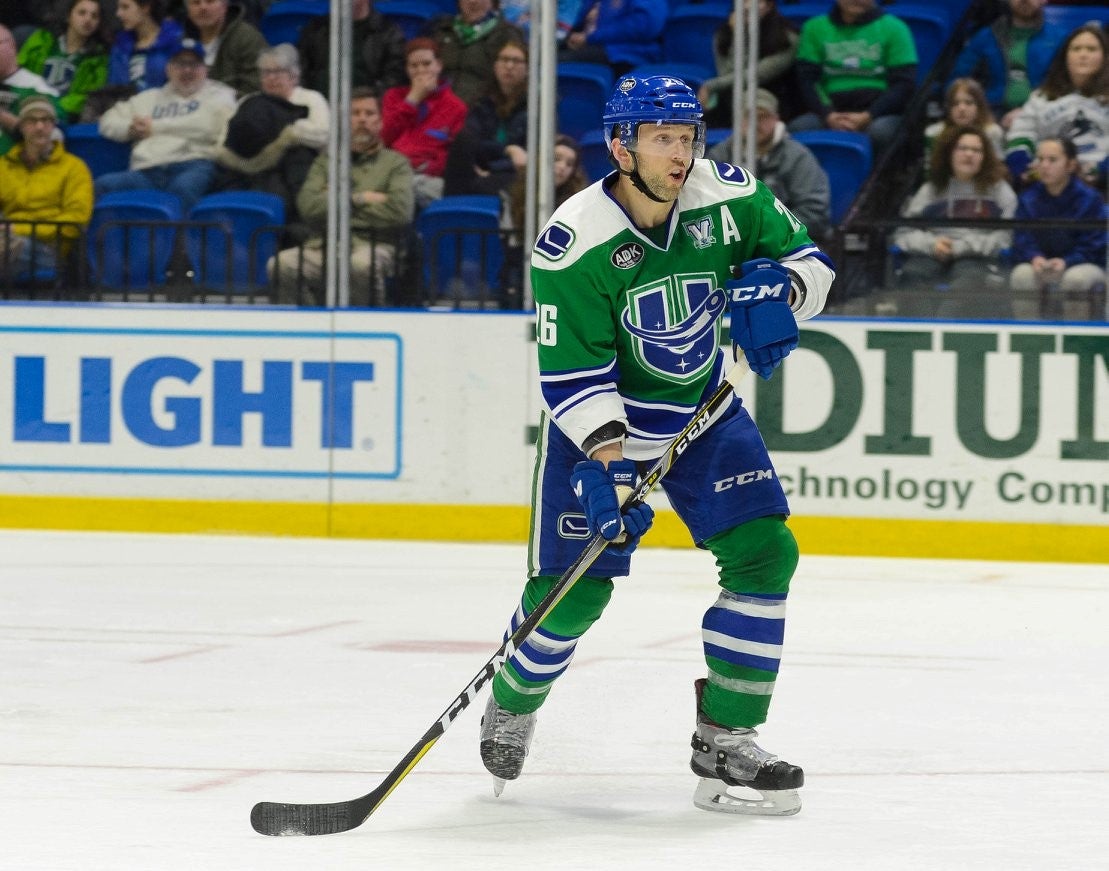 Dunkin’ Donuts was named the official coffee of the Adirondack Bank Center and the Utica Comets. Dunkin’ Donuts is now served at all events.

72 Tavern and Grill was announced as the newest fan experience at the Adirondack Bank Center. The full-service eatery with many televisions to show all the biggest games in sports is now open 7 days a week from 11am to 11pm and is the only place to catch Comets away games.

Jaime Sifers was named Comets 2017-2018 Specialty AHL Man of the Year for his outstanding contributions to the Utica community during the 2017-18 season. He was unanimously nominated by the Utica Comets staff. He participates in the Comets Hometown Hero program after every game as well as many other community initiatives. His work with the veterans continued into the 2018-19 season as he was an integral part of the Purple Heart Night planning. 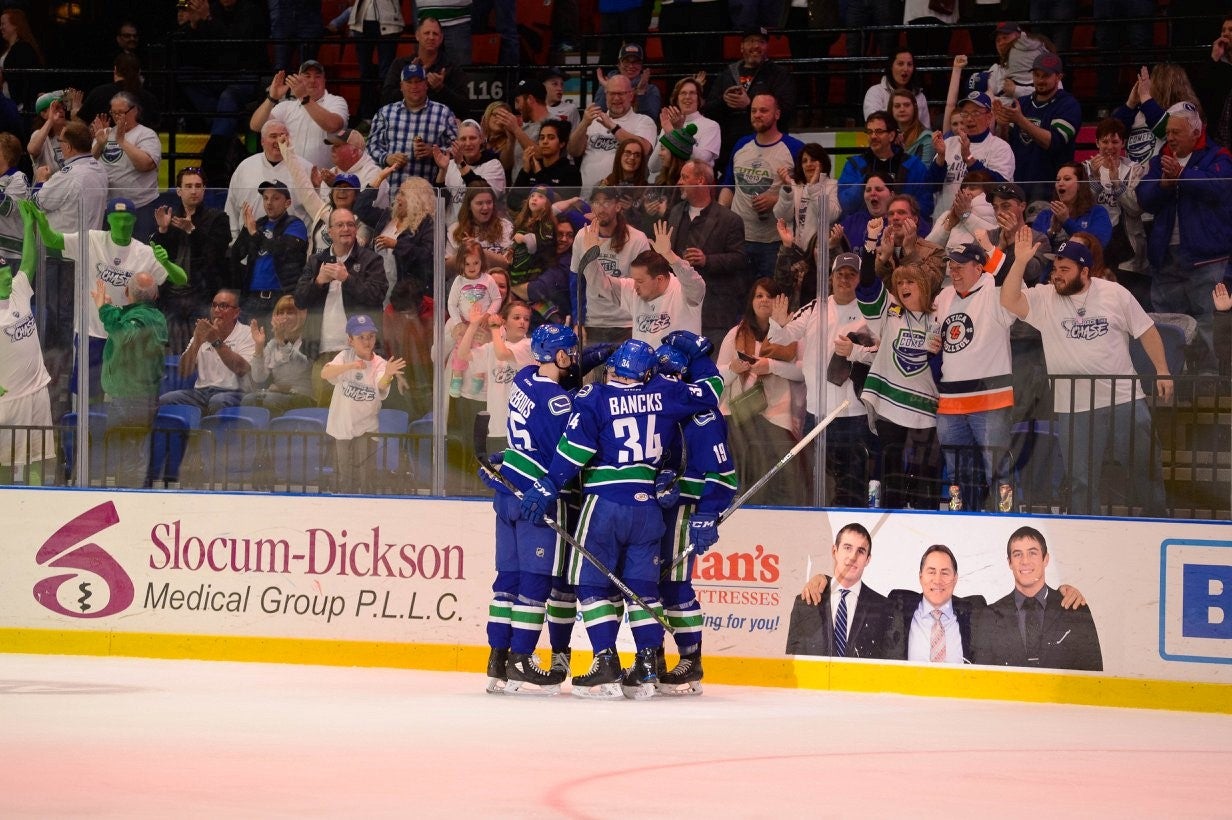 Utica College assistant coach Adam Dekker was called in as an emergency backup goaltender. He has waited two years for this opportunity and called it a “dream come true” to be able to suit up and go out on the ice for the Comets.

The Comets clinched a playoff spot and began battle against the eventual champions the Toronto Marlies. While the Comets fell in first round of the Calder Cup Playoffs they stretched the series to five games after two extremely memorable and loud wins on home ice. The Adirondack Bank Center was opened to fans for Game 5 for the largest Comets Watch Party ever but ultimately the season ended. 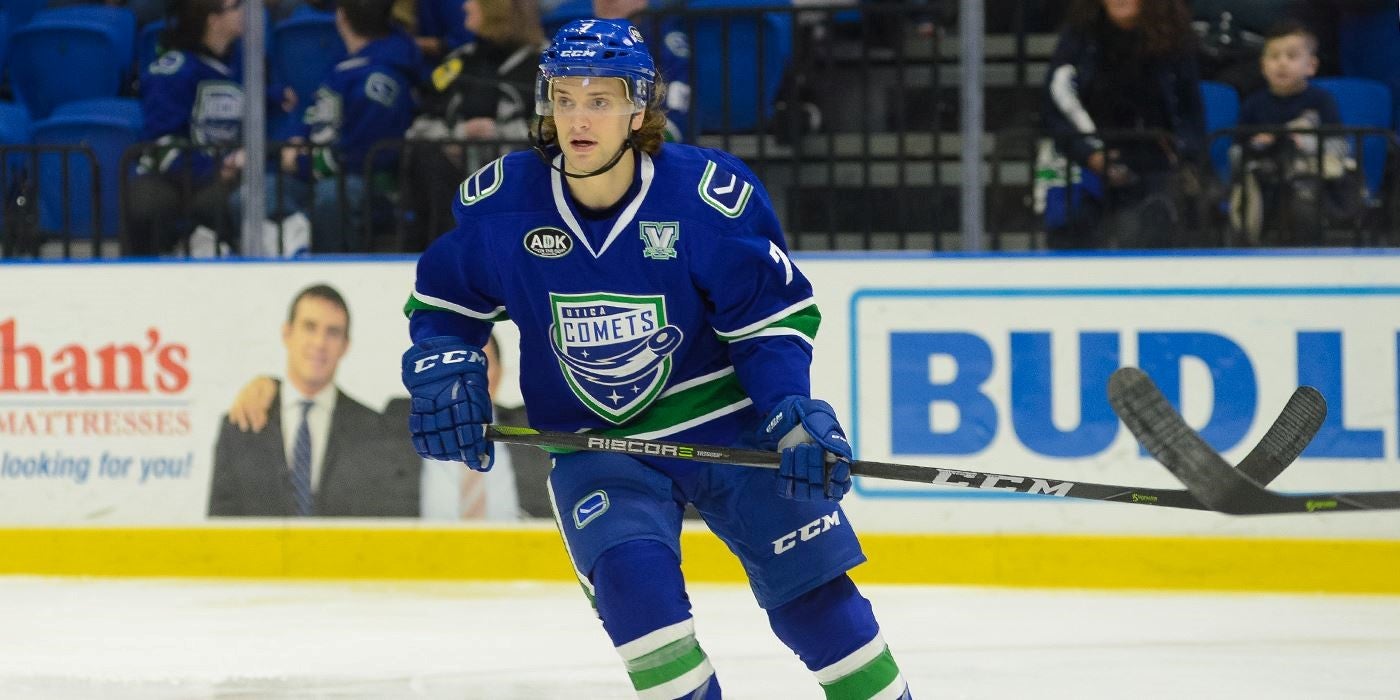 Comets began the off-season with the signing of Tanner MacMaster and Jagger Dirk to one-year contracts. MacMaster, played 13 games with the Comets last season after signing an ATO and registering 7 points. Dirk signed an ATO with Binghamton last year registering 1 point. 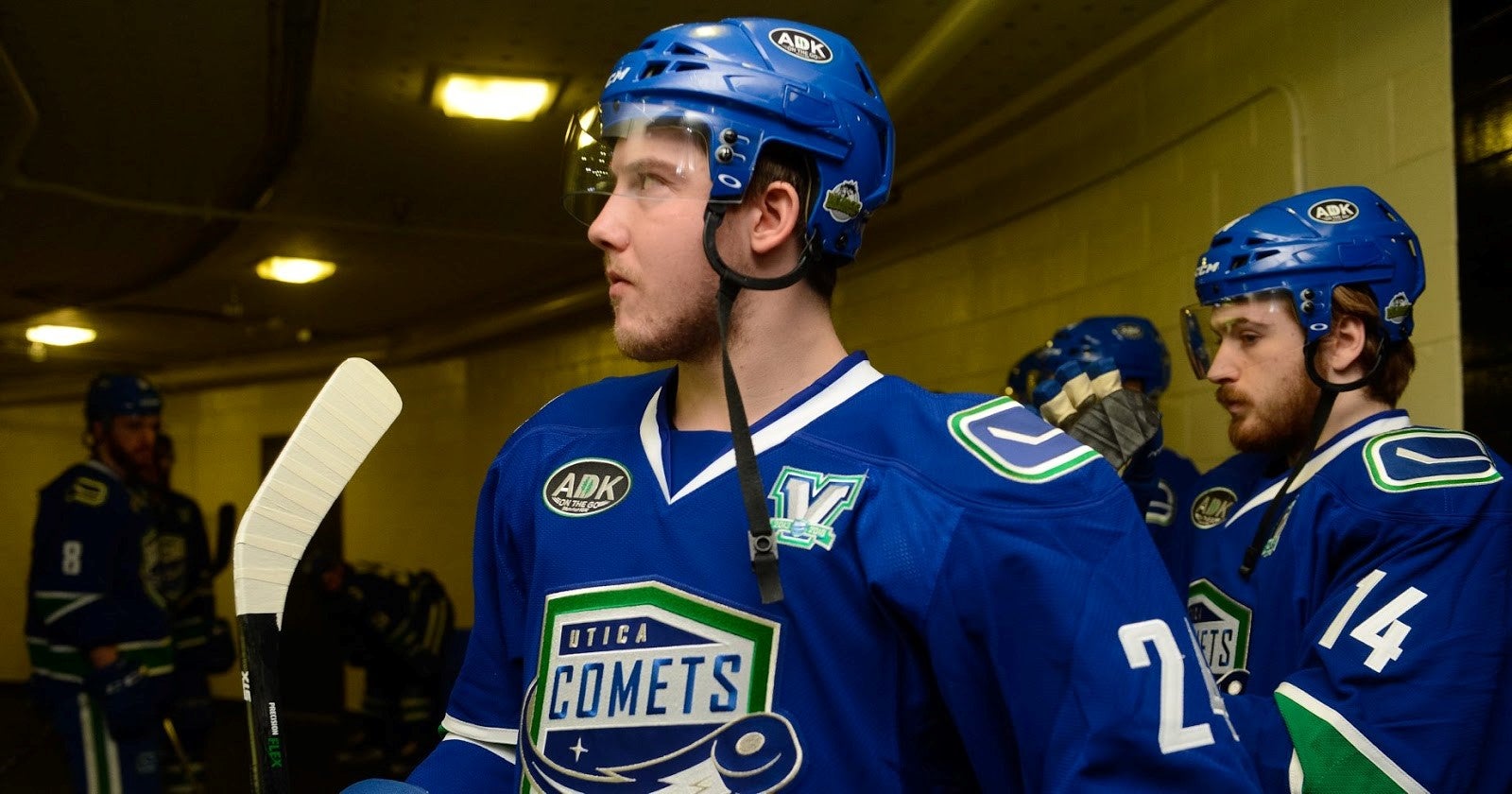 June started with the Adirondack Bank Center transformed as the UFC hosted UFC Fight Night 131: Rivera vs. Moraes. 72 Tavern and Grill opened its doors the same night to eager fans who enjoyed a special fight night menu including cable bacon, trash can nachos and delicious burgers.

On June 13, a new professional sports team was announced to share residency of the Adirondack Bank Center. Utica City FC, a major arena soccer league team, began its inaugural season earlier in December. Both teams are regular supporters of one another often watching games as a team from one of the suites.

Canucks continued their off-season signings by inking fan favorites Reid Boucher and Richard Bachman. Boucher played in 20 games with the Canucks last season, registering 5 points and led the Utica Comets in scoring with 46 points in 45 games. Bachman posted a 13-13-5 record with a .902 save percentage and 2.98 GAA in 31 game with Utica in the 2017-18 season. 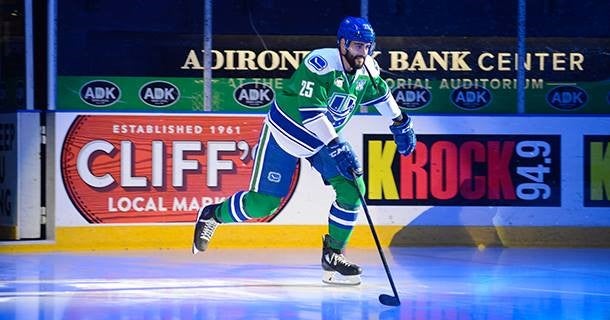 One day short of Independence Day the Vancouver Canucks re-signed the unofficial Mayor of Utica, Darren Archibald, to a one-year, two-way deal. Archibald split the 2017-18 season between the Canucks and the Comets. He registered 9 points in 27 games for Vancouver and 16 points in 25 games with Utica. The volume of the crowd as he returned to the ice at the start of the 2018-19 season rivaled any playoff game.

Joe Roberts was announced as new Comets broadcaster from the Kalamazoo Wings. Roberts was unanimously selected by the Comets organization for the position and has brought a colorful flare to the role. He was a finalist for ECHL Broadcaster of the Year Award in 2017 and the winner of the league's Media Relations Award of Excellence in 2018.

Comets 2018-2019 schedule released. This year there were 17 Friday home games and 26 weekend games for fans to enjoy and the Cleveland Monsters are back as an opponent for the first time since the 2015-16 season. 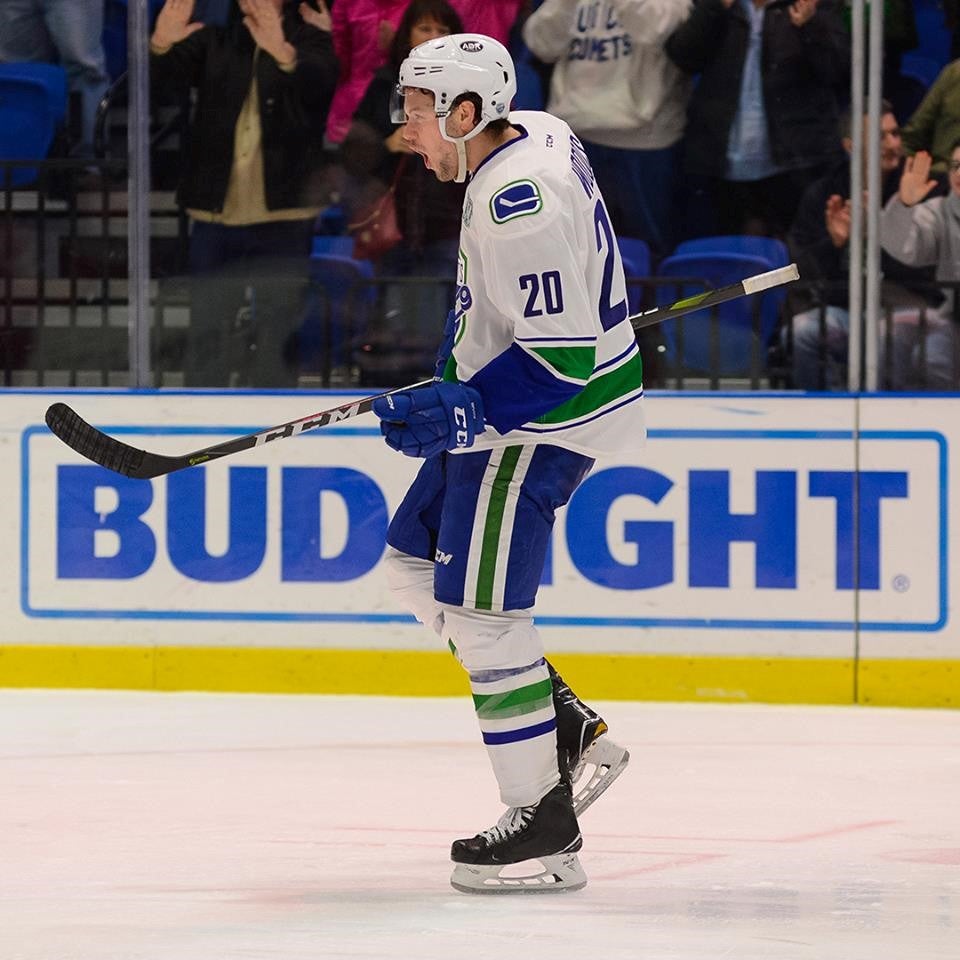 Ben Birnell of Utica Observer-Dispatch was named the winner of the 2017-2018 James H. Ellery Memorial Award for the most outstanding media coverage of the AHL.  He goes above and beyond to find stories about the organization on and off the ice. He provides the hockey club with regular stories on the pages of the O-D. He was formally given his award on-ice at a game in December. 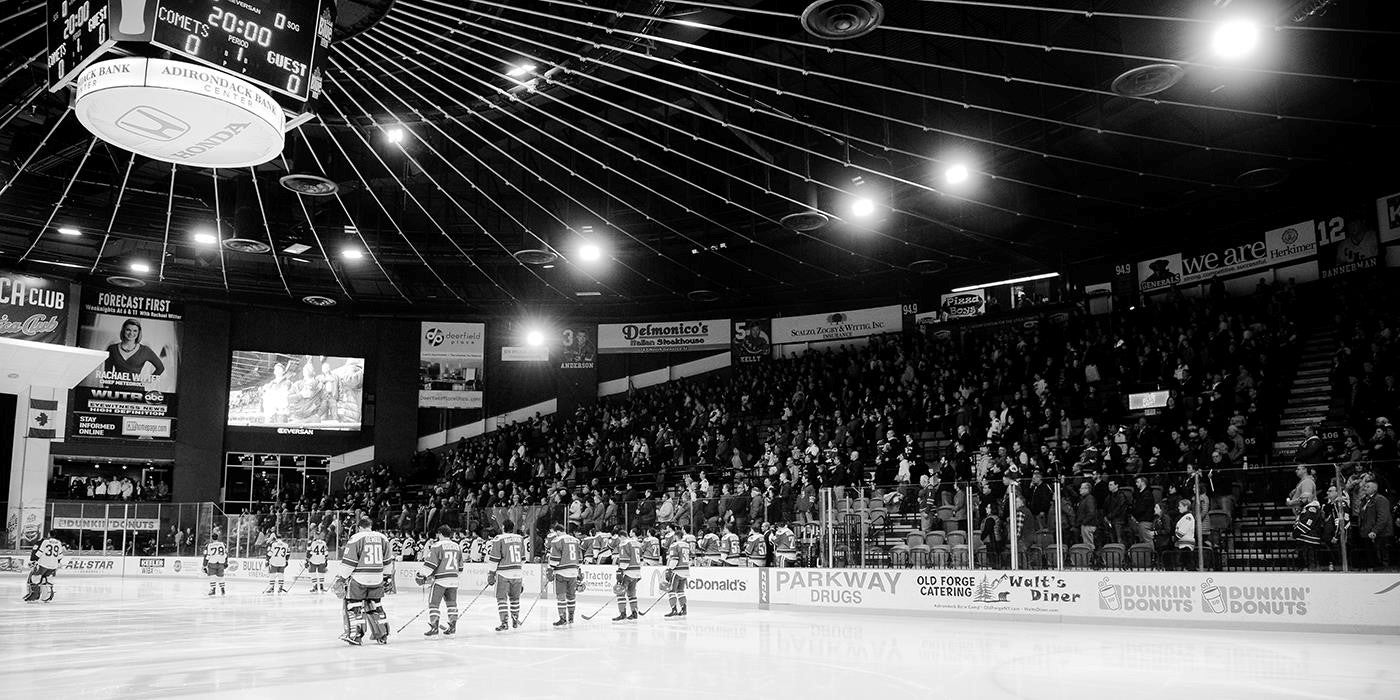 PepsiCo signed a seven-year exclusive deal with the Adirondack Bank Center to be the official soft drink. This deal applies to the arena and all of the tenants through 2026, along with 72 Tavern & Grill, and Aqua Vino Restaurants and Banquets.

Rainman was added as the new in-game host for the upcoming 2018-19 season. He is well known in the Mohawk Valley as a radio broadcaster. The Sitrin Street team was also announced as a new promotional team to improve the in-game experience for fans.

The Comets kicked off their sixth pre-season with a roster of 19 forwards, 9 defensemen and 3 goaltenders. Of the players 11 have been assigned by the Vancouver Canucks, 15 are attending on an AHL contract and 5 have been invited in a professional tryout. Preseason ended with a home and home contest with the Binghamton Devils. 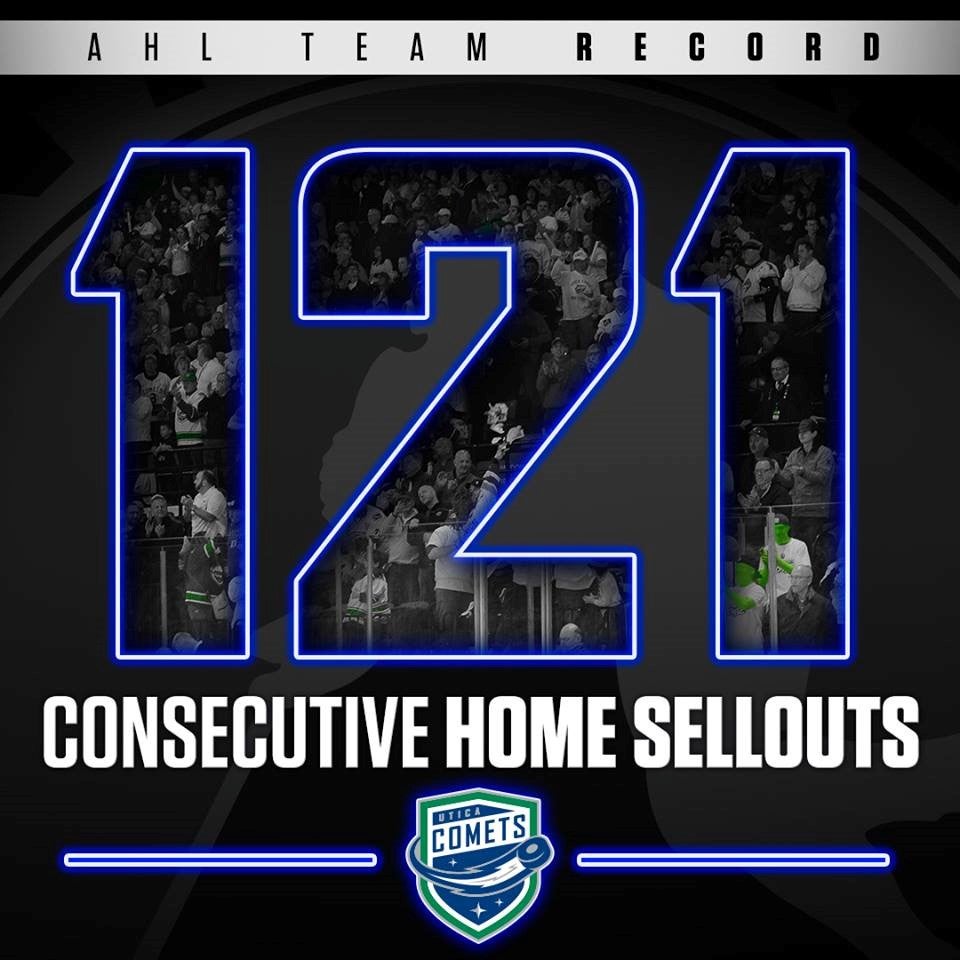 The Comets opened their sixth season on home ice against the Toronto Marlies. The Comets dropped that game but would go on to earn their first win of their season in their second game as they topped the Belleville Senators 3-1.

The Comets made history as they break the AHL sell out streak record at 121 games. This streak began back on April 10, 2015 and has carried on through three full seasons extending through today. The biggest testament to this streak comes from the devoted and passionate fans. AHL President Dave Andrews was in attendance to drop the first puck and fans gathered in the concourse to sign a commemorative banner which will be displayed at the arena. 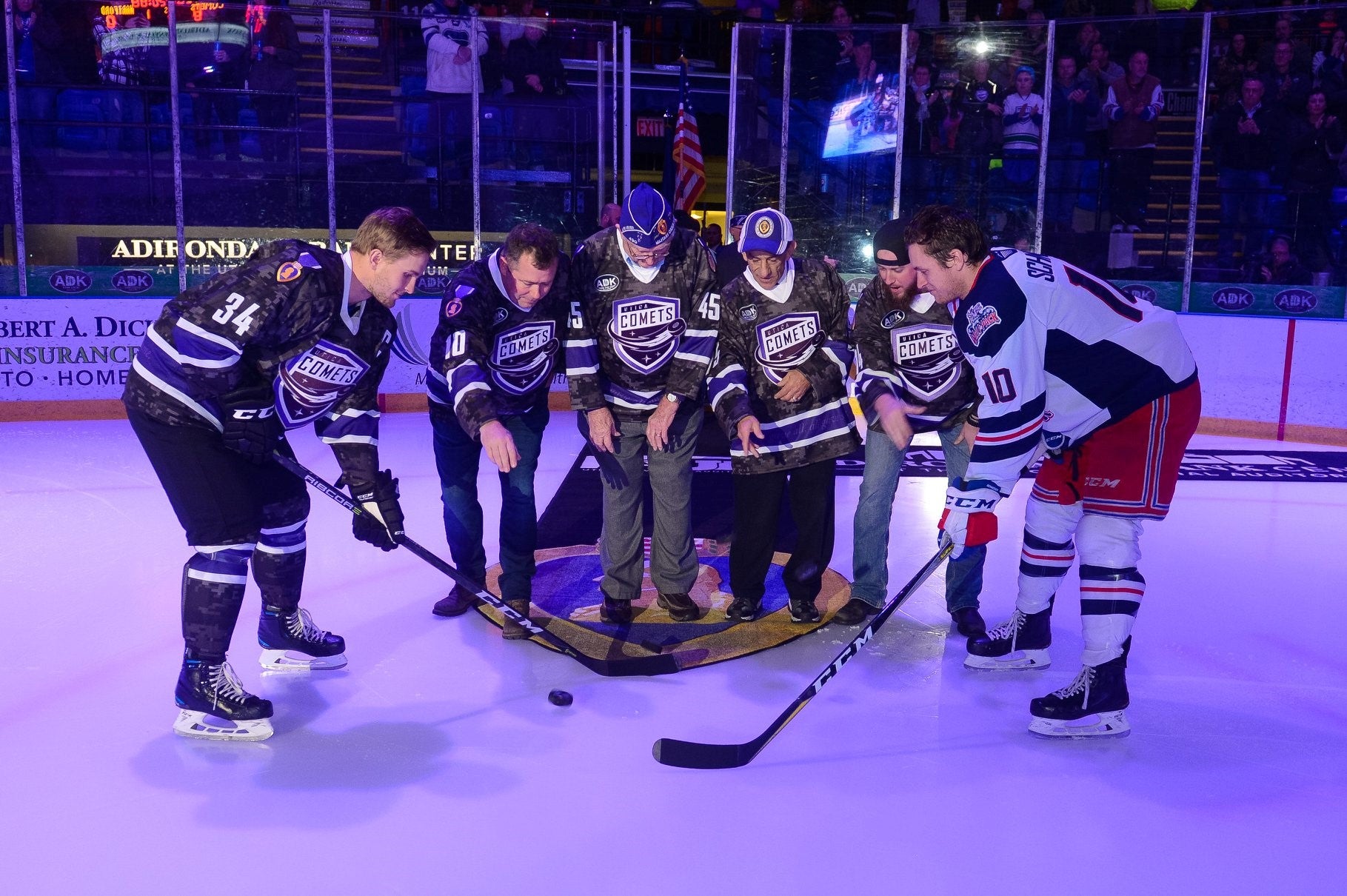 As without a doubt the biggest honor in Comets history, the team was honored by Chapter 490 of the Military Order of the Purple Heart as the First Purple Heart Hockey Club in existence. There was an unveiling of the Battlefield Cross monument that will be permanently affixed to the Plaza in order to represent the many lives that were lost on the battlefield where military personnel made the ultimate sacrifice. Pregame on November 9 a banner was dropped from the rafters as a proclamation was read declaring the Utica Comets a Purple Heart Hockey Club. The team dressed in purple and black camouflage jerseys would go on to top the Hartford Wolfpack and dedicate the win to the Purple Heart recipients in attendance. It was a special and memorable night for players, staff and fans.

The Utica Comets and AUD continued to add to the AUD Plaza with the unveiling of a life-size bronze statue of Clinton Comets: Dave Armstrong, Jack Kane, Pierre Prevost, and Borden Smith. These four players have stayed in the area since their playing days and have served as ambassadors of the area’s Comet Culture. The statue also features a plaque in remembrance of Ian Anderson, the fifth in the group, who passed away in November of 2013. Comets signed Colton Saucerman to a professional tryout contract. Saucerman, who became an overnight social media sensation due in large part to his luscious red beard, notched his first goal in his first start as a Comet leading to what is now referred to as Saucer-mania.

The Comets signed off on 2018 in style as Broadcaster Joe Roberts announced in-game on January 29 that the Canucks have extended their affiliate agreement with the Comets. Fans can look forward to many more years of exciting memories at the Adirondack Bank Center.