A HISTORY OF THE UTICA COMETS AND THE MILITARY

The Comets first received a letter over the summer from Joe Fraccola, Commander of CNY Chapter 490, expressing that he was moving forward with the national process to award the Comets with the Purple Heart Sports Team designation. In the letter, Joe expressed that the decision to name the Comets a Purple Heart team was an easy one, due to all of the work that the organization, as well as the Adirondack Bank Center and the Save of the Day Foundation, have done for both veterans and the entirety of the military; if it had not been for over five years of dedication to the military, the honor would not have been possible.

Back in 1960, when the Utica Memorial Auditorium (now the Adirondack Bank Center) was dedicated, it was Mayor McKennan who said it best:

“And you may ask why we named it the Utica Memorial Auditorium. Ladies and gentlemen, we did that to commemorate those young people who, of this community, who died while serving in the armed services. And to pay homage to them. And to remember them.

Many of us remember some of the, and many of the young people of the community who died while serving in the armed forces. And I’m sure that to them, the future held high hopes as it does for every young person. And among their number may have been many who might have become prominent in this community. And possibly one or more in the state, or in the nation.

But they never had that opportunity and of course, as we all know, it was through no fault of their own. These young people are not to be remembered because they became prominent here. Or because they gave great gifts to charity. But because they gave more than all of these things. They, they gave their lives. And so, we have named this the Utica Memorial Auditorium.

So that as long as these walls shall stand. They will be remembered, by succeeding generations in this community.”

As long as the building stands, it will memorialize all of those who lost their lives while protecting our freedoms and our country. 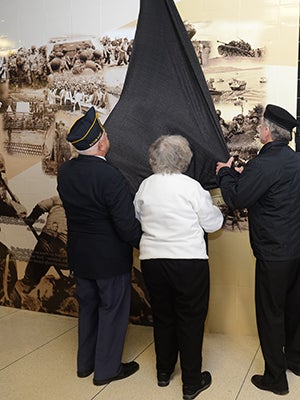 At the conclusion of the first Comets season, the arena unveiled a military-themed memorial mural located at the entrance to the building via the Labatt Blue Ticket Entrance. The mural depicted scenes from all major conflicts to-date (additions were made in 2016 to include the Vietnam and Korean wars), as well as prominent quotes from past Presidents regarding the sacrifices that were made on the battlefield. 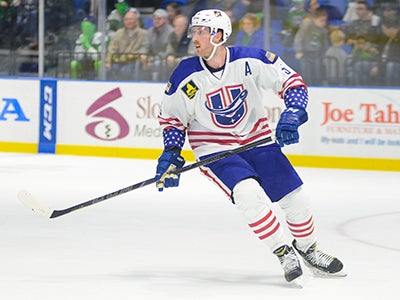 Throughout their 5+ years in existence, the Comets have held numerous military appreciation nights, to both raise money and awareness to the sacrifices of our local veterans and active military. During years 2, 4, and 6, the Comets have donned custom military theme night jerseys, which were subsequently auctioned off to raise money for local organizations such as the CNY Veterans Outreach Center, Chapter 490 Military Order of the Purple Heart, and Chapter 944 Vietnam Veterans of America. 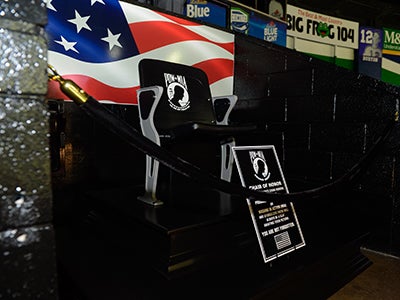 In November of 2017, as a precursor to their military night, the Comets and Adirondack Bank Center unveiled a POW Memorial Chair, located in section 215 of the inner concourse. The ceremony, led by Rick Redmond, GM of the Adirondack Bank Center, served as a tribute to American prisoners of war and those missing in action. Redmond spoke not only to the importance of remembering our veterans, but also remembering those who have been taken captive and hope to return home to American soil unharmed. The ceremonial chair sits behind a velvet rope, with a plaque in front of it reminding all viewers of the sacrifices made by over 85,000 POWs who have yet to return home. 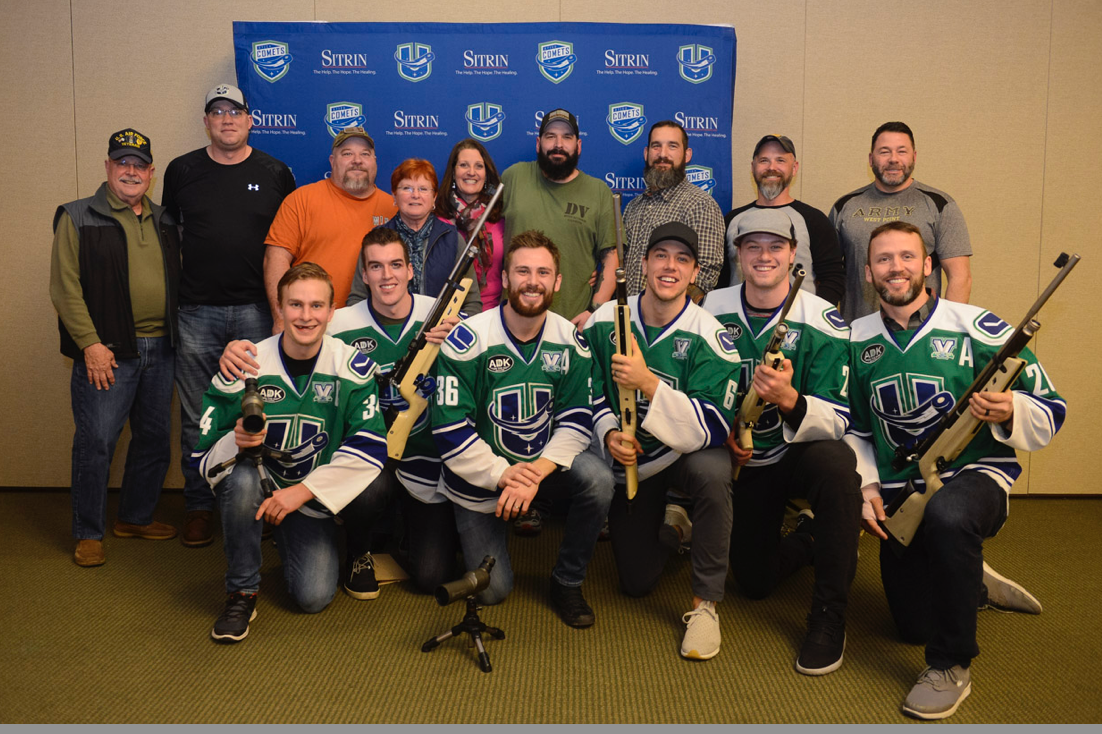 Since 2013, the Comets have also engaged in an array of military-themed community endeavors. In conjunction with Express Employment and Sitrin, the Comets have encouraged fans to bring canned goods and non-perishable food items to games as part of the Feed Our Vets program. Comets players have also annually attended an adaptive shooting program at Sitrin, in which players and veterans spend the afternoon at a shooting range as part of the veterans’ Military Civilian Coalition. 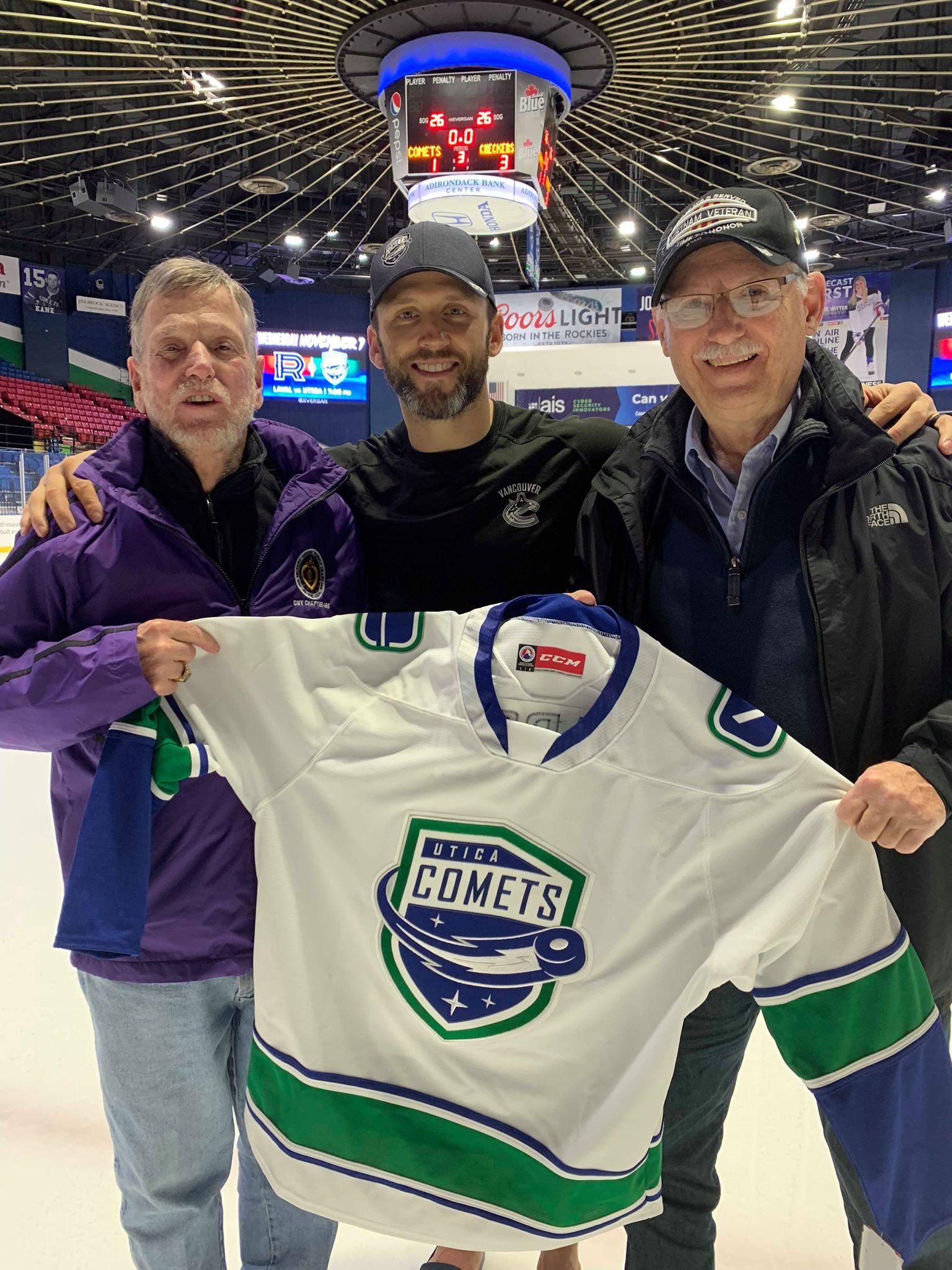 At the start of Year 5, the Comets began an initiative known to all fans as the “Hometown Hero.” At the start of each game, the Comets publicly recognize a veteran and thank him or her for their service through a message on the video board, custom jersey, and standing ovation. Immediately following the game, Comets defenseman Jaime Sifers personally meets the Hometown Hero, signs autographs, and takes photos. Since its inception, the Hometown Hero initiative has been widely known as the most successful in-game facet of the Utica Comets gameday experience.

On November 9, the Comets look forward to adding the honor of a Purple Heart recognition to their repertoire, and to continually honoring veterans both at the Adirondack Bank Center at the Utica Memorial Auditorium and beyond.