A WEEKEND TO REMEMBER: VETERANS DAY AT THE ADIRONDACK BANK CENTER

On Friday, amidst the snow and wind, the Utica Comets officially became the first Purple Heart Hockey Club in the United States. And despite chilly temperatures and a nail-biting finish, all of the cards fell in line for the most memorable night this season, and perhaps ever, at the Adirondack Bank Center. 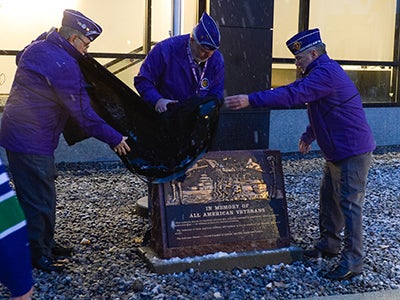 Friday night kicked off with the Official Proclamation Ceremony out on the plaza, where over 100 dedicated Purple Heart recipients, veterans, Comets players & staff members, and fans huddled together under tents to listen to the reading of the proclamation by Joe Fraccola, Commander of Chapter 490 Military Order of the Purple Heart. Under the falling snow, Fraccola, along with Rick Redmond, GM of the Adirondack Bank Center, also unveiled three permanent memorials on the plaza – the Military Branch Flag Memorial, the All-American Veterans Memorial, and the Battlefield Cross Monument. It was a touching ceremony, with raw emotion visible in the faces of those in attendance, both military and non-military, old and young, and men and women, alike. 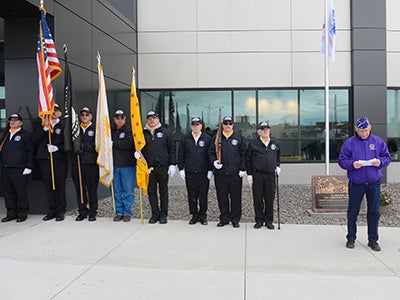 The next portion of the evening – a pregame on-ice ceremony – kicked off with a video tribute to Purple Heart recipients while members of the CWA Chapter 1126 as well as veterans and volunteers brought a large American flag out onto the ice. Fraccola, Redmond, and Robert Esche, President of the Comets, hit the ice for a shortened reading of the proclamation, which ended with the banner unveil from the rafters. Applause flooded the Adirondack Bank Center, as a sellout crowd rose to their feet to honor those who have made the ultimate sacrifice to protect our freedoms. The on-ice ceremony continued with the singing of our Nation Anthem by Specialist Kathryn Verbitsky of the New York Army National Guard, and concluded with four veteran puck droppers – Jack Hensel from World War II, Dennis Jacobs from the Vietnam War, Wiley Jones from the Iraq War, and Greg Lewis from Operation Enduring Freedom. 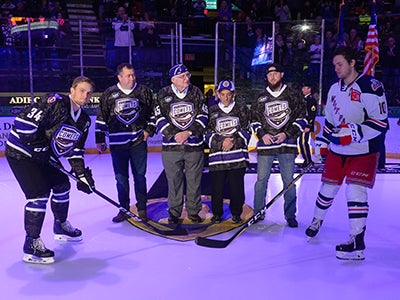 It was then up to the Comets players to do their job on the ice, and that they did, all while wearing specialty Purple Heart military jerseys. The game was filled with excitement and high-energy, with the first goal of the game coming from Zack MacEwen almost halfway through the second period. Despite starting out on top, the Comets managed to fall behind 3-1 heading into the third period. 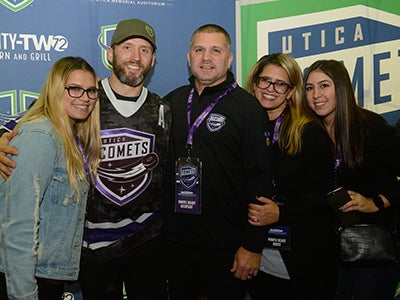 In true comeback fashion, the Comets, who undeniably fed off of the positive energy in the building, managed to tack two more goals on the board during the third, courtesy of Lukas Jasek and Jonah Gadjovich, sending the already-memorable night into overtime. Comets goaltender Ivan Kulbakov stood on his head during the overtime minutes, making 10 saves and keeping the game at 3-3. In the shootout, the Comets delivered, with goals from Jonathan Dahlen and Michael Carcone and another standout performance from Kulbakov, to send the crowd into the loudest cheer heard yet this season at the Adirondack Bank Center.

After an enormous on-ice celebration and a center ice salute, the majority of the Comets roster, including Jaime Sifers, who has been the lead in the locker room with their dedication to the military, turned their attention to the suite wing where they paid one final tribute to the Purple Heart recipients who had been watching from Zuhaus. 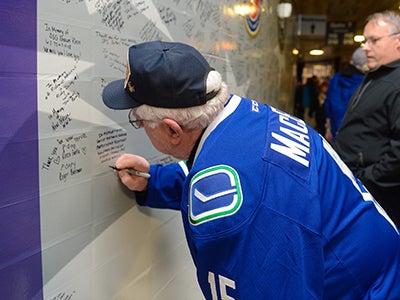 During the night, fans had their chance to honor Purple Heart recipients as well as all veterans and active military through an arena-wide Hometown Hero initiative, as well as a special recognition of all Purple Heart recipients in attendance. Fans also had their chance to sign the new Military Recognition Signing Wall in honor of any military member, past or present – a wall that quickly filled up as the night went on.  Comets fans were also able to test their luck on two auctions – a ‘Best Bid’ and live auction – with all proceeds benefitting the CNY Veterans Outreach Center, Chapter 490 Military Order of the Purple Heart, and Chapter 944 Vietnam Veterans of America. Comets Broadcaster Joe Roberts kept the energy high following the game through an entertaining live auction that saw fifteen jerseys go to new owners, all for a great cause.

For all involved, ranging from players to staff to fans, it was a night that will never be forgotten, and one that left a permanent mark on the hearts of the entire arena. The honor of being named the first Purple Heart hockey team in the nation is one that the Comets will carry throughout their existence. 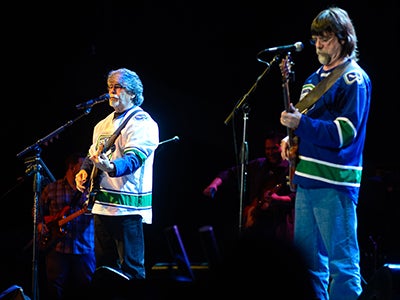 Even after the Comets game concluded, the celebration of Veterans Day weekend continued, with a packed Alabama concert on Saturday night. On Sunday, November 11, Fraccola and a bus loaded with veterans arrived at the Adirondack Bank Center to lay a wreath on the new memorial out on the plaza during a short but intimate Veterans Day ceremony.

“It was an absolute honor for our organization to receive such an honor from the Military Order of the Purple Heart,” said Comets President Robert Esche. “We feel so positive about the strong relationships we have built and continue to build with our local military organizations and look forward to building and growing it in the coming years.”

A Message from Joe Fraccola, Commander, Chapter 490 Military Order of the Purple Heart

Awe-inspiring Patriotism is what our Purple Heart Recipients and Gold Star Families felt as the Utica Comets were declared a Purple Heart Hockey Club.

Speaking on behalf of the Patriot members of CNY Chapter 490 MOPH, their Families, our Gold Star Families and the many in attendance at the outdoor ceremony in the rain & snow…the ceremonial acceptance of the Purple Heart Proclamation by the Utica Comets Hokey Club, the unveiling of the new All-American Veterans Memorial and the Modern Day Battlefield Cross was without doubt one of the most memorable ceremonies for our Purple Heart families. 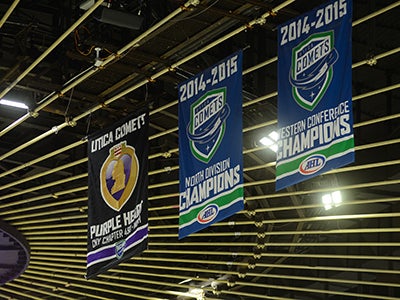 The Utica Comets evening reception was outstanding in every way possible to make our Purple Heart Recipients and Gold Star Families feel so honored. The Utica Comets Military Appreciation Night with the unfurling and waving of our American Flag, the National Anthem singer, the Color Guard, the Ceremonial Puck Drop and standing ovations for all veterans was a great highlight for all. The new Honoring Veterans Wall Wrap gave all in attendance the opportunity to honor their loved ones and friends who served. With the Utica Comets Hockey Club players and coaching staff, wearing their Purple Heart Team Jerseys, they each played their hearts out to give the Purple Heart Recipients, Gold Star Families and all the fans suck a great win on such an inspiring night.

THANK YOU, is not enough to say for what the success of the November 9, 2018 Purple Heart Hockey Club Ceremonies and Game meant to all in attendance especially our Purple Heart Recipients and Gold Star Families.