Just down the Thruway to Syracuse, over the border to Toronto, and as far away as Cleveland, there is one man who makes sure the Utica Comets arrive where they need to be for every road game.

For the Utica Comets, the man entrusted to keep it between the lines and off the rumble strips is Mark Barry.

Barry, who is in his fourth year driving the Comets, and his first with Hale Transportation, loves to be a part of the team. While most drivers simply operate the gas and brakes, the man known as “Marky Mark” can be seen in the locker room helping the staff, loading the truck to leave after a game, or just rooting on the team when he’s not driving.

“I love the camaraderie,” Barry said. “Getting along with the boys, hanging out. Helping out and doing what I can to make everyone’s life easier.”

When the team arrives to the rink for a game away from home, you can find Barry in his office, Marky Mark’s Visor Cleaning Station. There’s a sign that’s hung up in every road arena. Players drop their helmets out and Barry works his magic. It’s no surprise why the Comets have the cleanest and clearest visors in the league. 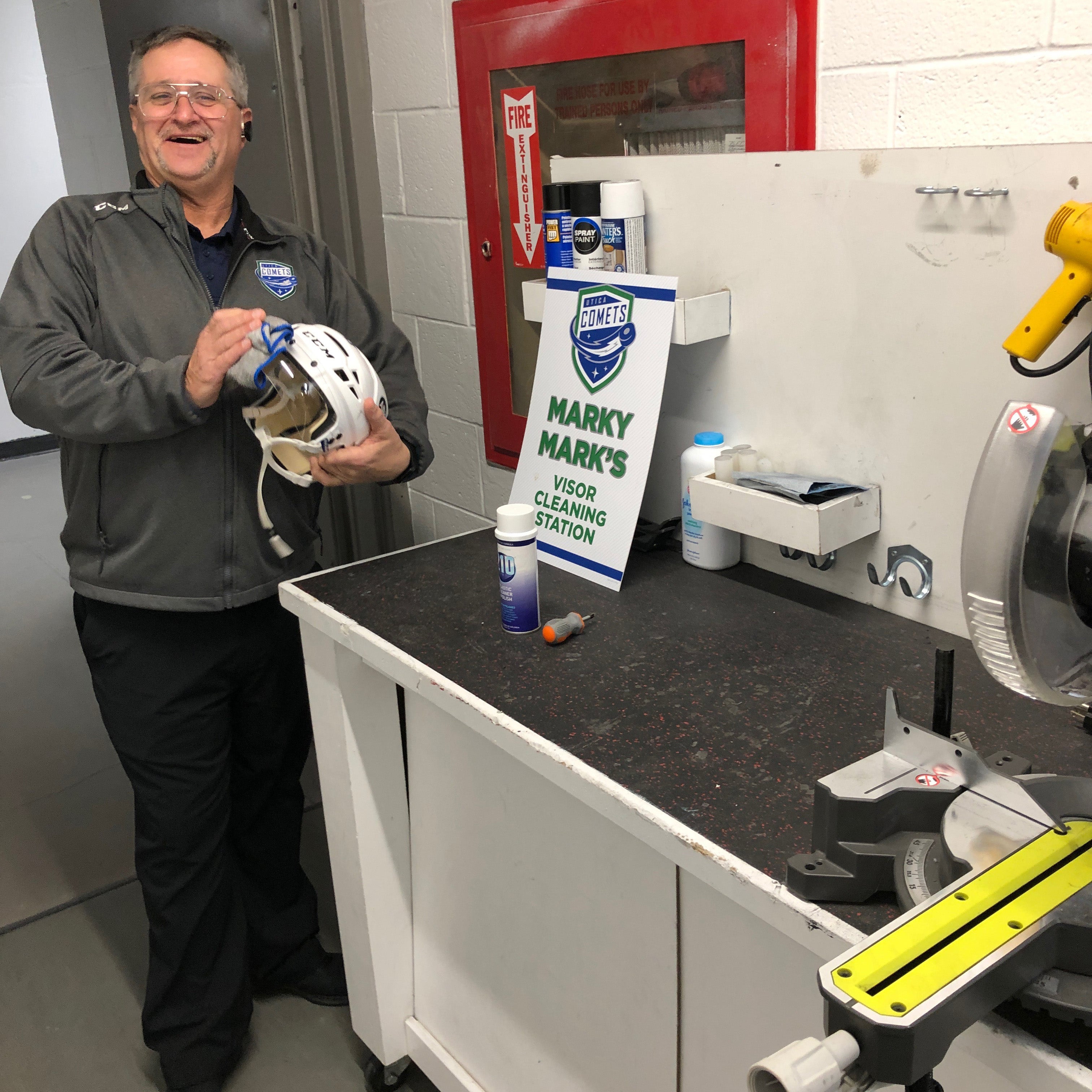 Mark is part of the team and his work ethic and willingness to help under all circumstances are what earned him a spot. He’s almost the assistant assistant equipment manager, constantly helping Damion Parmelee and Greg Lowden.

“It’s something I like doing. I like lending a hand and doing what they need to get their jobs done quickly and efficiently,” Barry mentioned. “It’s in my nature to help people out.”

Barry can be found even helping during home games, taking in the action from the corner of the ice where the Comets enter and exit. But when he can’t get out to the contest, he’s always tuned in.

“I wasn’t a big hockey fan until I started driving the boys,” he said. “Now I’m fully into it!”

Of course, every hockey fan has to have a favorite player, and Barry is no different.

“I like watching all of them play,” he said, very diplomatically. But after thinking, he came up with a few.

“I liked watching (Thatcher) Demko,” he said. “Brendan Woods was another one. Reid (Boucher) now. But I like all the guys, they’re all respectful and good to me and I enjoy being around them.”

The big challenge on the late-night trips, usually accompanied by driving snow or wind, is keeping the big bus between the lines. So what’s the secret?

“Getting my rest, relaxing between morning skate and the game. That lets me keep the guy in the front right seat off my back,” he laughed.

Not all trips are perfect. Barry has unforced errors like any other professional. For example, on a recent trip down to Allentown for a game against Lehigh Valley, he reached for the wipers, but accidentally hit the air horn.

As everyone jolted out of their seat, it was discovered that it was an inadvertent honk, and a moment that Trent Cull said kept everyone on their toes and honest. A mistake that helped everyone get better.

See, Marky Mark is part of the team.