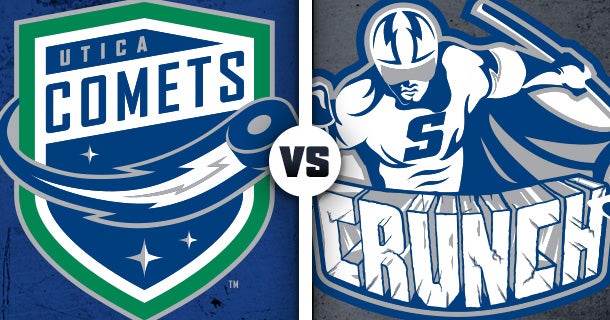 Tonight’s Game: The Comets step onto the ice against the Syracuse Crunch for the fourth time this season. In the previous three games the team is 2-1. The last time these two teams met was back on February 27 when the Comets defeated the Crunch on the road, 4-2. Currently, the Comets sit at the third spot of the North Division with 13 points (6-3-0-1). The Crunch have played six more games than the Comets acquiring 19 points (9-6-1). The divisional standings are based on winning percentage with the Comets holding a lead in that category.

Last Game: Last night at the Adirondack Bank Center, the Comets were defeated in their first game back in 30 days after the Rochester Americans won by a 4-2 score. Despite being up 2-1, Utica couldn’t hold the lead and the Amerks used a solid third period to skate away with the victory. Last night marked the first time this season that the Adirondack Bank Center welcomed fans into the building.

Scouting the Crunch: The Crunch are lead in scoring by Boris Katchouk with 14 points (6G, 8A) in 15 games played. John Ludvig leads their team in scoring by a defenseman with two goals and six assists for eight points on the year. Alex Barre Boulet is the team’s leading goal scorer registering seven tallies on the season. Samuel Montembeault continues to play every night for the team with a record of 5-3-1 along with a 2.77 GAA and a .901 save percentage.

Gadjovich Leads the Comets: Jonah Gadjovich not only leads the team in goals scored this year with nine in ten games played but with two assists on the year he is now the team’s leading point producer. The forward has a goal in each of his last three games. Only three times this season has Gadjovich failed to score a goal.

First time in a Long Time: The team being out of game action for thirty days jumped right back into the fray last night in a 4-2 defeat by Rochester. But, with that long layoff comes plenty of games compacted into a short amount of time. The team will travel back from Syracuse tonight to face the Crunch yet again on Tuesday and Wednesday at home before traveling to visit the Providence Bruins on Friday afternoon.