At 5 p.m., before all Utica Comets' home games, off-ice officials begin to gather in the Media Room. The group of 16 will soon disperse around the arena to begin their various duties but first they make time to share a meal as friends.

Rocco Palmieri, a rural mail carrier for 35 years, is usually the first to take his place at one of two large banquet-sized tables reserved for the men in black.

Identified by his black pullover with an AHL embroidered logo, and an ID badge hanging around his neck, Palmieri is one of the 16 volunteer officials assigned to each Comets' home game.  Now in his fifth season working Comets' games, having not missed one game, the Westmoreland resident is proud of his and his teammates' contributions.

"You look at the game in the order of the job you're doing," explains Palmieri who routinely works as the official scorer. "The excitement in you must stay intact. I assist in tracking every touch of the puck.  But, you could be assigned the penalty box, goal judge, if we're short of bodies, you have to be versatile."

While Palmieri can be seen documenting passes and shots, with clipboard in hand in the home team's penalty box, Ilion natives John and Gene Bullis, brothers whose hockey's interest goes decades back, are also regulars at the pre-game meal.

John, now in his second AHL campaign working Comets' games, can be found in the officials’ box at puck drop.  It was while volunteering a pro golf tournament at Turning Stone Resort and Casino, John Bullis ran into Utica crew chief Mike Fitzgerald.

"We have a mutual interest in hockey, and one thing lead to another.  I handle league statistics during games.  All the data generated up top; time on ice, shots, plus/minus, I put all that data in the league statistics.  Minute to minute action then goes onto the internet," Bullis, who played hockey collegiately for Cortland State, explains.

Bullis, like Palmieri and their teammates, perform their assignments without often receiving recognition. They are rarely seen. Arena Zamboni drivers and security guards have more public visibility than the 16-man crew spread throughout the arena.

According to Bullis, there are four crew members tracking every player on ice, two for the home team and two for the visitors, at all times. Time on-ice is only one of many crucial statistics monitored by off-ice officials.

Bullis, a former Dean at Herkimer College, tells of his assignments being far more intense than he originally thought, and remains amazed at how many different assignments there are, and the amount of work that goes into each.

As the tables begin to load up of the assigned officials, it's clear that they are a tight group. Their work will only be as accurate as they guy next to them. From the conversations rolling from seat to seat, the laughter shared reassures each official remains confident in their roles.

Two hours prior to game time, Mike Fitzgerald is busy. As crew chief, the puck stops with him.  Beginning his officiating days back in the 1980's with the Utica Devils, Fitzgerald has been tracking professional games in Central New York for 30 years.

Fitzgerald is often among the last to head for the parking lot, long after the final horn is sounded.  During games, Fitzerald is positioned upstairs tracking shots on goal, and maintaining the box score – and all other duties. Experience overrules any potential unknowns for Fitzgerald.

For all that his responsibilities call for, no different than those skating in uniform, Fitzgerald is quick and eager to compliment his fellow crew members for their contributions on a successful night's work.

"Every week I send out an email to the guys, to see who's available (for upcoming games). They respond by Wednesday. Our work can go from quiet to very busy in a matter of minutes," Fitzgerald offers.

After preparing for three periods of regulation play, and often receiving more, Fitzgerald leaves his home at 4:45 p.m. for ADK Bank Center.  He could walk out, anywhere between 9:20 to 10:50 p.m.  Logging up to six hours commitment each game, plus another two hours or more while working from home, Fitzgerald, like his teammates, echoes the “for the love of the game” mentality.

"You can't show emotion, no favoritism on what's going on in the game. We (officials) are working for the league.  It's nice when the home team wins because that means more opportunity to work, when the playoffs come around," Fitzgerald said. 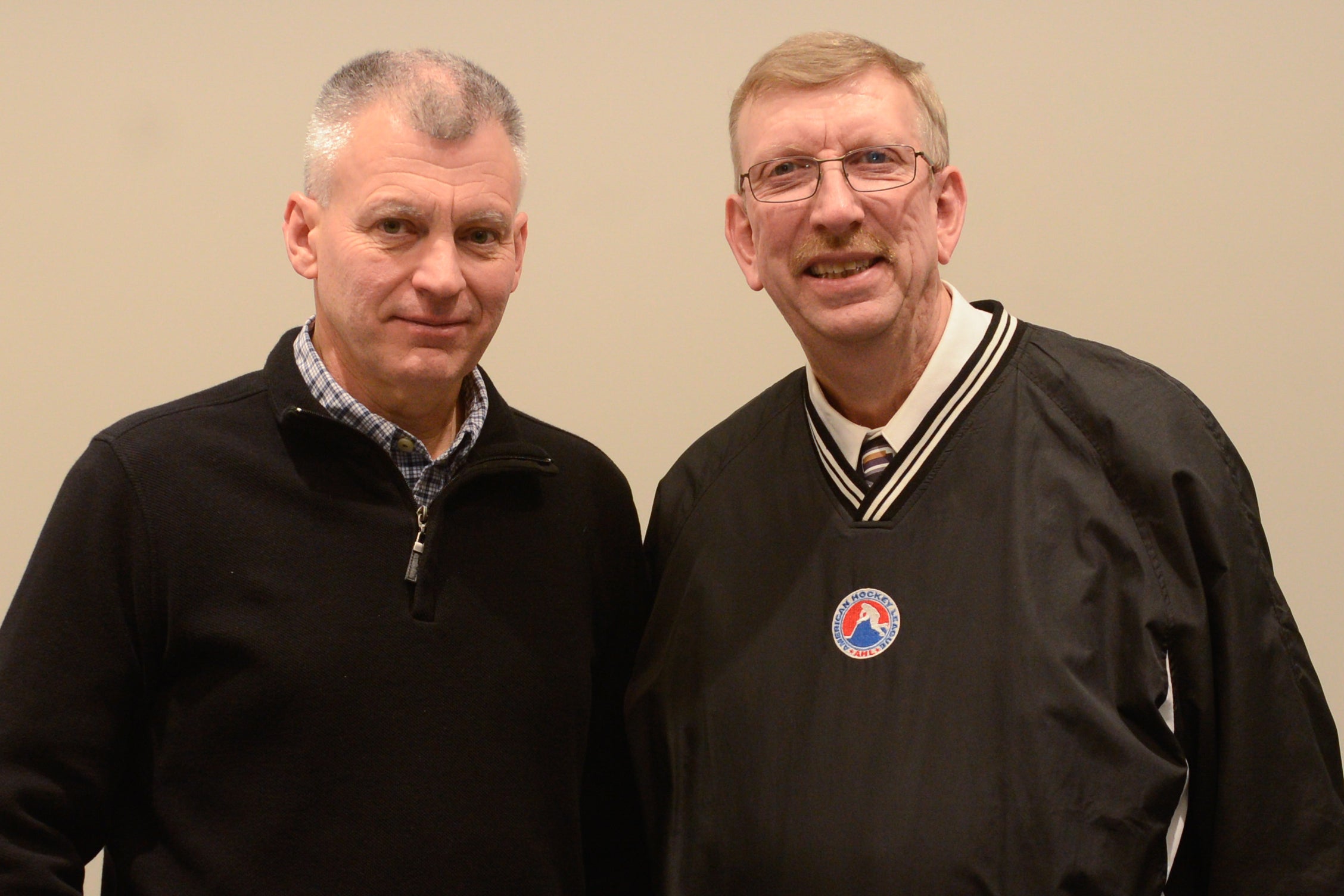 Part of Fitzgerald's enthusiasm comes from working with a crew consisting of many longtime members. Mark Caswell, Sr. and Rob Bouck are included among the veterans, as are assistant crew chief Tom Hart and Rick Trinco.
"I think that I started (off-ice officiating) the second or third season of the Utica Devils in '1988 or 1989," recalls Hart, 58, and semi-retired from running his auto collision business.

"I played hockey, and was a season ticket holder to the Devils, since their first season.  I ended up sending a letter to the Devils' media director, telling him of my interest of working with the off-ice officials. Then, I get a call from him, and I've been put in every position since."

All referee decisions are steered Hart's way.  On-ice officials wanting to watch video of a play or goal, it is Hart showing them frame by frame.

Hart tags the 2015 Calder Cup Finals as the most memorable assignment he's worked.  “It was electric.  It was so loud, I couldn't hear the whistle on ice level."

"My father drove the Zamboni for years. I saw them (off-ice officials), and I decided that I'd like to do what they did," Rick Trinco, 60, reveals.

During games, Trinco is perched at ice-level, seated between PA announcer Tom Coyne and the timekeeper.  His assignments are many. Trinco emphasizes, while he is watching the game, he misses the celebrations on a play gone well, as he concentrates on logging required statistics.

Trinco isn't shy to proclaim himself a fan of hockey, and happy to watch games. But, when not traveling as a project supervisor for a contracting company, the Utica native offers his favorite game assigned, during the days of the Devils.

"Both goalies stood on their heads.  It was a 0-0 game, late in the third period. Craig Billington for the Devils, and Patrick Roy was in goal for the Sherbrooke Canadiens."

From sharing a pre-game meal, filing out collectively to their assigned game positions, to sharing observations in-between periods, or just exchanging family stories, the comradery among AHL off-ice officials, particularly in Utica, stretches beyond 60 minutes of hockey.

Off-ice officials have some of the best seats in the house, do their job and take nothing for granted.