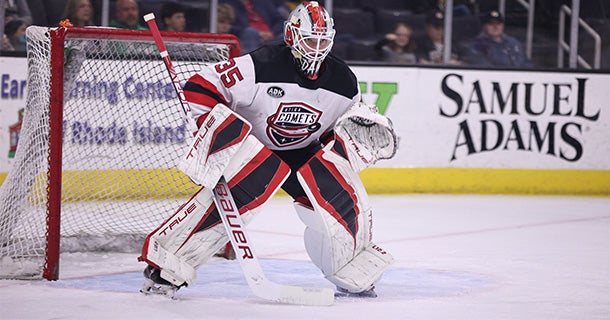 Utica, NY – The Comets battled the Atlantic Division’s Providence Bruins in the final game of the 2021-22 regular season on Saturday night. To close out what has already been a historic year for the Comets, they skated away with a 4-2 victory against the Bruins and headed into the playoffs on a high note.

In the first period, the Comets started the scoring when defenseman Jeremy Groleau struck to give his team a 1-0 lead at 5:56 when his point shot sailed past Brandon Bussi, the Bruins netminder. The goal was the second of the season for Groleau and it was assisted by Aarne Talvitie and Patrick Grasso. The Comets added to their lead, and it was Grasso’s first AHL goal that gave his team a 2-0 lead after he fired a one-timer off the crossbar and in at 15:03 from Brian Flynn and Tyler Wotherspoon. After the first period, the Comets held a 2-0.

There was no scoring in the second period but it only took 20 seconds into the period for Chase DeLeo to score his 20th goal of the season on a wrist shot over the goalie Bussi. The goal, assisted by Brian Halonen and Tyce Thompson, helped the Comets to a 3-0 lead. The Bruins finally got onto the scoreboard when Curtis Hall scored on Utica goalie Nico Daws cutting the Comets lead to 3-1. It was only 11 seconds later when Steven Jandric’s shot alluded Daws and so Utica was only up by one. DeLeo added an empty net goal at 19:04 to help secure a victory for Utica and an end to their regular season.

The next time the team steps onto the ice at home will be during the first round of the playoffs. For playoff tickets, please visit uticacomets.com/playoffs.