Five games. 57 hours. That’s the task that looms over the Adirondack Bank Center staff this weekend. 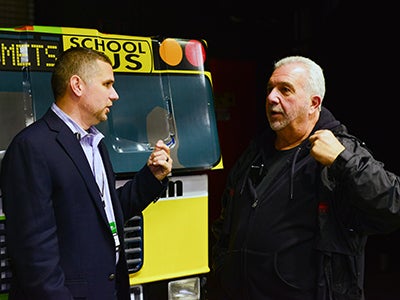 For arena general manager Rick Redmond, it’s just another work week, even though he plans on logging in upwards of 90 hours.

“This week is a large amount of man hours for my staff of 22,” Redmond said. “Tomorrow after the Comets practice is our first change event of the week. We will shift from hockey to basketball for the Harlem Globetrotters event on Thursday and that should take about six to seven hours.”

The process of changing over isn’t magic, but it’s incredibly time-consuming. The million-dollar question is: what happens to the ice?

“The ice does not get melted. It stays in from August/September and comes out in May/June. The ice gets covered every time we do an event. Our arena flooring protects and insulates the ice and it goes down as the base for the basketball court,” Redmond said. 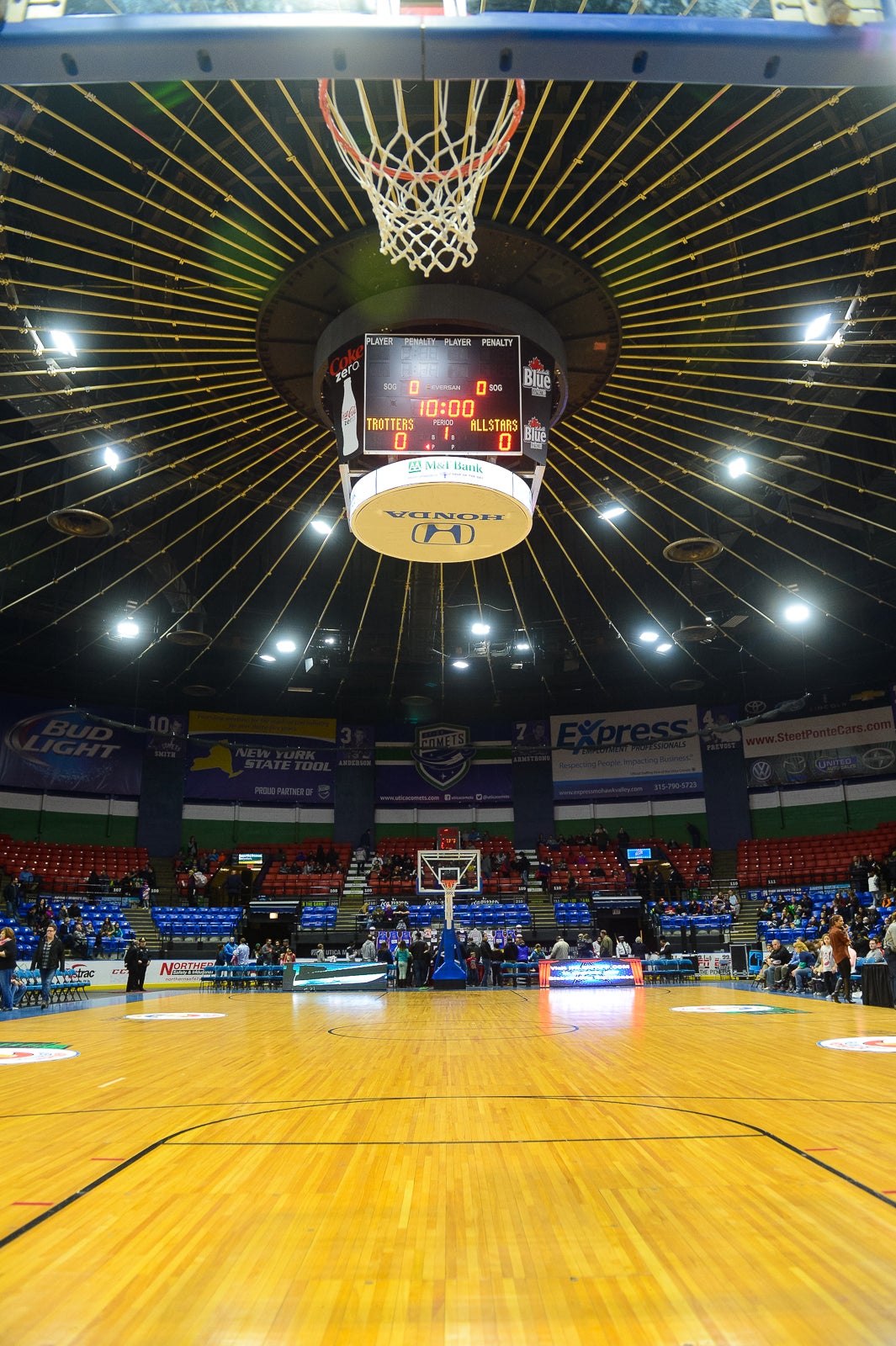 “The basketball court we use was manufactured in 1958 and delivered to this building in 1960,” he added. “There’s been decades of Globetrotters basketball played on this court.”

Once the show is over on Thursday, the work to convert back to ice begins. The next task: three hockey games over the course of two days. This includes two Utica Comets games and a Utica College matinee.

“After the Comets game, so between 9:30-10 PM on Saturday night, we will convert to turf for Utica City FC on Sunday,” Redmond said. “Usually we have about 650 man hours for the building staff, but this week we’re looking at about 900.”

“I just put the plans together, they are the ones who pull everything off,” he said, talking about his staff. “We’re very fortunate to have a world-class crew. Some have been here for well over 15 years.

“Ray Meyers, Randy Lilley, Alex Lilley, and Donny Bienkowski… those guys are the core and, along with the rest of the staff, they are the reason that 15,000 people will walk through these doors this weekend and have a memorable experience. 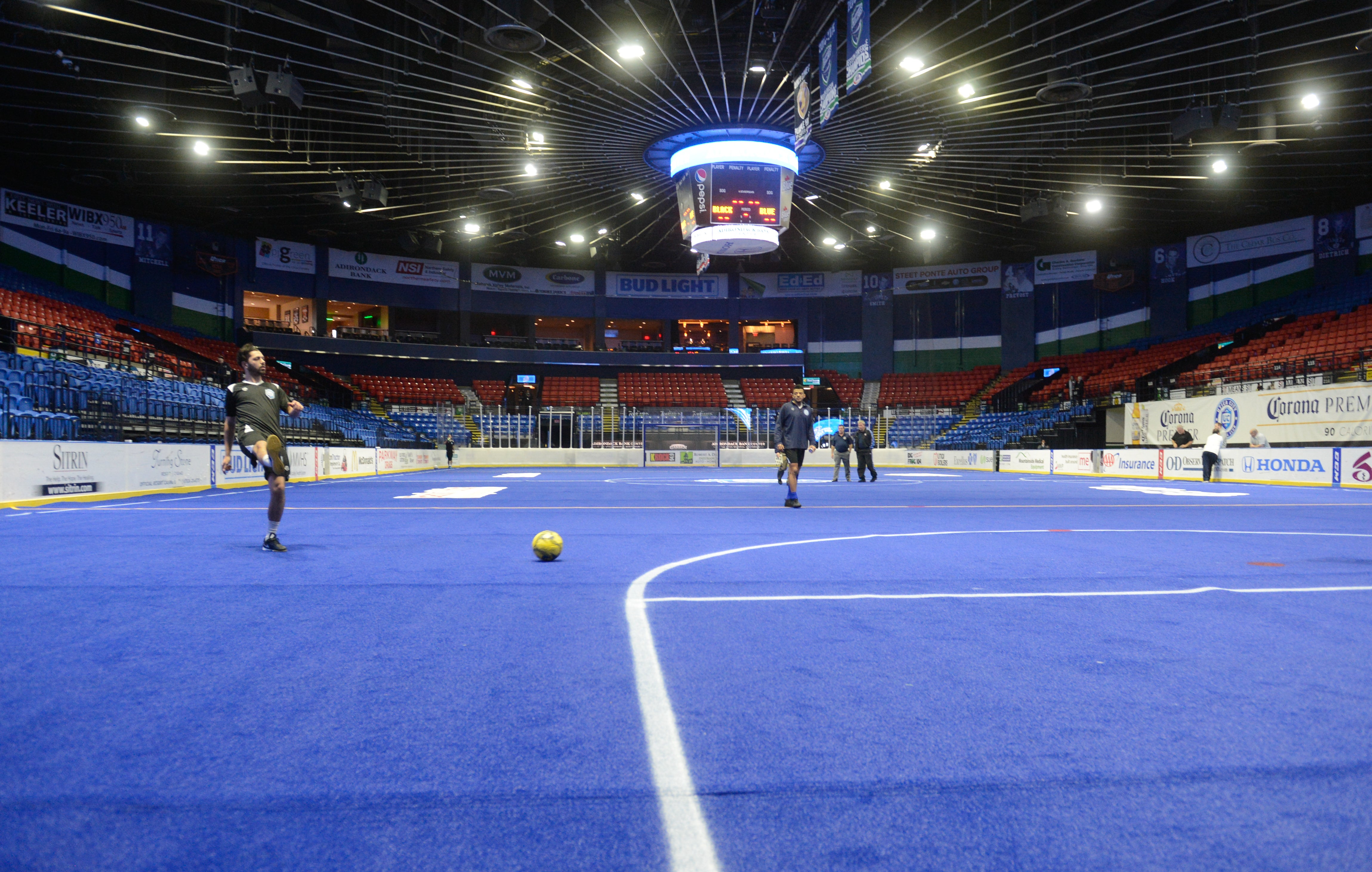 When fans file out on Sunday after the UCFC game, it might be the end of the weekend for them, but for Rick and the conversion crew, there’s still one last task.

“We have to pick the turf back up and be ready for Comets practice on Monday.”

As a home to countless teams and events, there’s never a dull moment at the Adirondack Bank Center or for its staff. The parts are always moving and the work is never ending. Certainly, Redmond has to have a favorite part of the madness.

He picked up his head and cracked a grin.