Utica, NY - The Utica Comets are proud to announce that Jaime Sifers has been named the team’s winner of the IOA/American Specialty AHL Man of the Year award for his outstanding contributions to the Utica community during the 2017-18 season.

Jaime Sifers was unanimously nominated by the Utica Comets staff as the IOA/American Specialty AHL Man of the Year. From the moment he arrived in Utica he made it known that he had a passion for serving the community and time and again he has dedicated his free hours to local veterans.

Sifers takes part in the Comets Hometown Hero program after every home game. The Hometown Hero is a local veteran, usually from the Central New York Veteran’s Outreach Center, who is selected to receive two free tickets to the game, a custom jersey, a concession voucher and a gift certificate to a local restaurant. 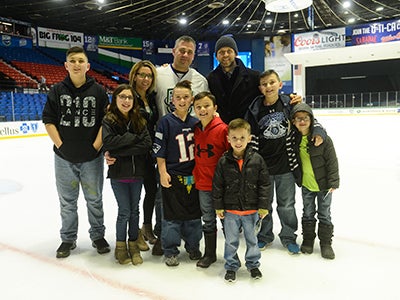 The highlight for the veterans however is the meet-and-greet with Sifers at the conclusion of the game. He takes the time to get to know them and their family and to take photos and sign autographs. It is truly a special experience for the fans but it is something that is also near and dear to Sifers heart as a son of a veteran.

In addition to the Hometown Hero program, Sifers has participated in various other outreach programs in the community. In December, he joined up with the Military Rehabilitation Program at the Sitrin Healthcare Center. He and fellow Comets learned adaptive shooting from the veterans and took part in a friendly competition.

“We met a great group of men that day. Not only did we get personal shooting lessons from the vets, we had some good laughs and heard first-hand the different jobs they did to keep us safe,” said Jaime Sifers. “A very memorable day, to say the least.” 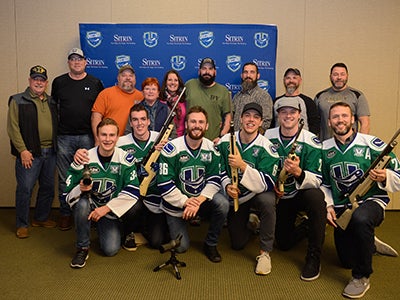 In February, Sifers had the opportunity to tour the Central New York Veteran’s Outreach Center located in downtown Utica. As he explored the many services offered at the center the wheels in his head began to turn as he thought of ways to partner with the center.

“My recent visit to the CNY Veterans Outreach Center was eye opening. The work that Mr. Scalise and his team have done to help the veterans of this community and those in need of a fresh start, is endless,” said Sifers. “Centers like this are such a valuable asset to the communities they serve and I’m thankful for the chance to meet with our countries veterans and learn about their service.”

Sifers is in the process of organizing a way for teammates to donate unwanted furniture and household goods to the CNYVOC when they leave Utica for the summer. This will help the center as they provide assistance to homeless veterans and help them set up long-term housing.

Sifers is now one of 30 finalists for the AHL’s 2017-18 Yanick Dupre Memorial Award, honoring the overall IOA/American Specialty AHL Man of the Year. The league award is named after the former Hershey Bears forward and AHL All-Star who died in 1997 following a 16-month battle with leukemia. The winner of the Yanick Dupre Memorial Award will be announced by the American Hockey League at a later date.