Bet you didn't know when the horn at Adirondack Bank Center was first installed.

It's assumed to most hockey fans today that the horn heard bellowing after each Utica Comets' goal, or during a Utica College hockey game, has been operational from day one in 1960. Not so.

In checking their records, Kahlenberg, the horns manufacturer has the Utica Devils Fan Club as the purchaser of the T-3 air horn (26 ¾" long projector with 142 hertz) on December 10, 1991. 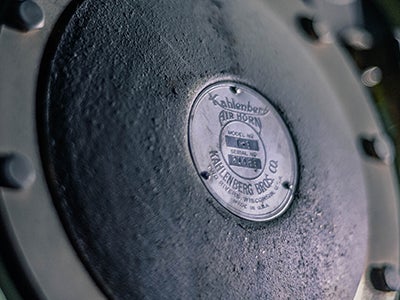 "It's a T-3 air horn (serial number 21483); a brass version," Steve Koch, sales manager at Kahlenberg Industries in Two Rivers, Wisconsin, manufacturer of the horn, tells.  "Oh God, it should last a lifetime; 50-70 years. The diaphragm would be the only part that could be replaced, and that we could re-machine."

Along with the folks at Kahlenberg, who have been in business since 1895 turning out quality sound signaling products for marine and industrial purposes, there are a number of regulars to ADK Bank Center that can offer much details on hockey life, before and after the horn's installation.

The simple black box, as Coyne labels where the button lays that when pushed sets off the horn, sits in front of Section 115, just before the first row of four seats. Beyond the plexiglass, Coyne sits with a copy of the AHL rulebook, microphone,  computer screen, and a readied finger.

"There was no horn until the Devils came", offers longtime AHL off-ice official Mike Fitzgerald.  "They wanted it to sound like what the Blackhawks had at Chicago Stadium."

Fitzgerald remembers a time when during the first five seasons of AHL hockey in Utica, beginning in 1987, with no horn or music playing. But, the first time the horn was set off, to Fitzgerald, and others sprinkled throughout The AUD, "It felt professional. Oh, that was great."

The goal horn has had some busy and memorable times, since the Devils' second-to-last season in the city.

On November 2, 2001, against Lebanon Valley, Ron Mexico scored the first-ever Utica College Pioneer's men's goal at The AUD, in the second period.

Both Jimmy Sokol and Tim Coffman, each with 58 UC career goals, are the program's leaders.

Earlier this season, on December 1, 2017, a combined 13 goals were scored, in the overtime thriller.

Perhaps one of the few times that an AUD crowd could have  drowned out the Kahlenberg, was during the May 8, 2015 Comets' 2-1 overtime victory, as Alexandre Grenier scored the winner.  As the Comets were marching to the Calder Cup Finals, the evening before at The AUD, they would go to four overtime periods against the Richard Bachman-led Oklahoma City Barons.

Ray Biggs, now in his seventh season calling UC men's hockey on radio, explains the difference between The AUD's horn, and others heard at NCAA D-III games he has observed.

"A few (schools) have air horns, but they are tough to distinguish from each other. None are like The Aud's.  There's something magical about the Teddy Bear games, and hearing the horn go off."

To get a true perspective of hockey at The AUD, pre-Devils, perhaps there is no more experienced source than John Pitaressi.  For 40-plus years, Pitaressi covered sports for Utica's Observer-Dispatch and The Daily Press. He recalls a time when an organist entertained hockey fans, pre and post goals being scored.

"Ernie the Organist" was set up in the southeast corner of The AUD, by the stage area. My recollection is when a goal was scored, the organ started to play."
One game that sticks out with Pitaressi came during the 1974-'75 Mohawk Valley Comets season, involving local favorite John Sheridan, and the Philadelphia Firebirds.  As the period concluded, and other than Sheridan still on the ice for the Comets, all heck broke loose.

"Sheridan attacked the entire team (Firebirds). While they were fighting, and until the Comets could get back out on to the ice to help Sheridan, Ernie continued to play his organ.  Guys were fighting everywhere, and there's Ernie bent under the organ, still playing."

From Brian Gustafson's team leading 25 goals during the Mohawk Valley Stars' ACHL championship season of 1981-'82, to youth hockey taking up AUD ice time, for most, there's no forgetting individual and team highlights. Players of all ages, they don't forget their first horn.

"I was playing as a mite, when I got to come to The AUD, to skate during intermissions of Devils games," Rome native and future New Jersey Devil Tim Sestito remembers. "I did that a couple times. It was the only time I scored at The AUD. It's exciting, when you're seven or eight-years-old. I want to say I heard the horn go off."

For decades the scoring signal in Utica has been uniquely their own, and should be for the foreseeable future. Something old, something borrowed; a Kahlenberg air horn, passed down as a gift from one Utica-based AHL franchise, to the next generation of ADK Bank Center hockey tenants, remains much appreciated.