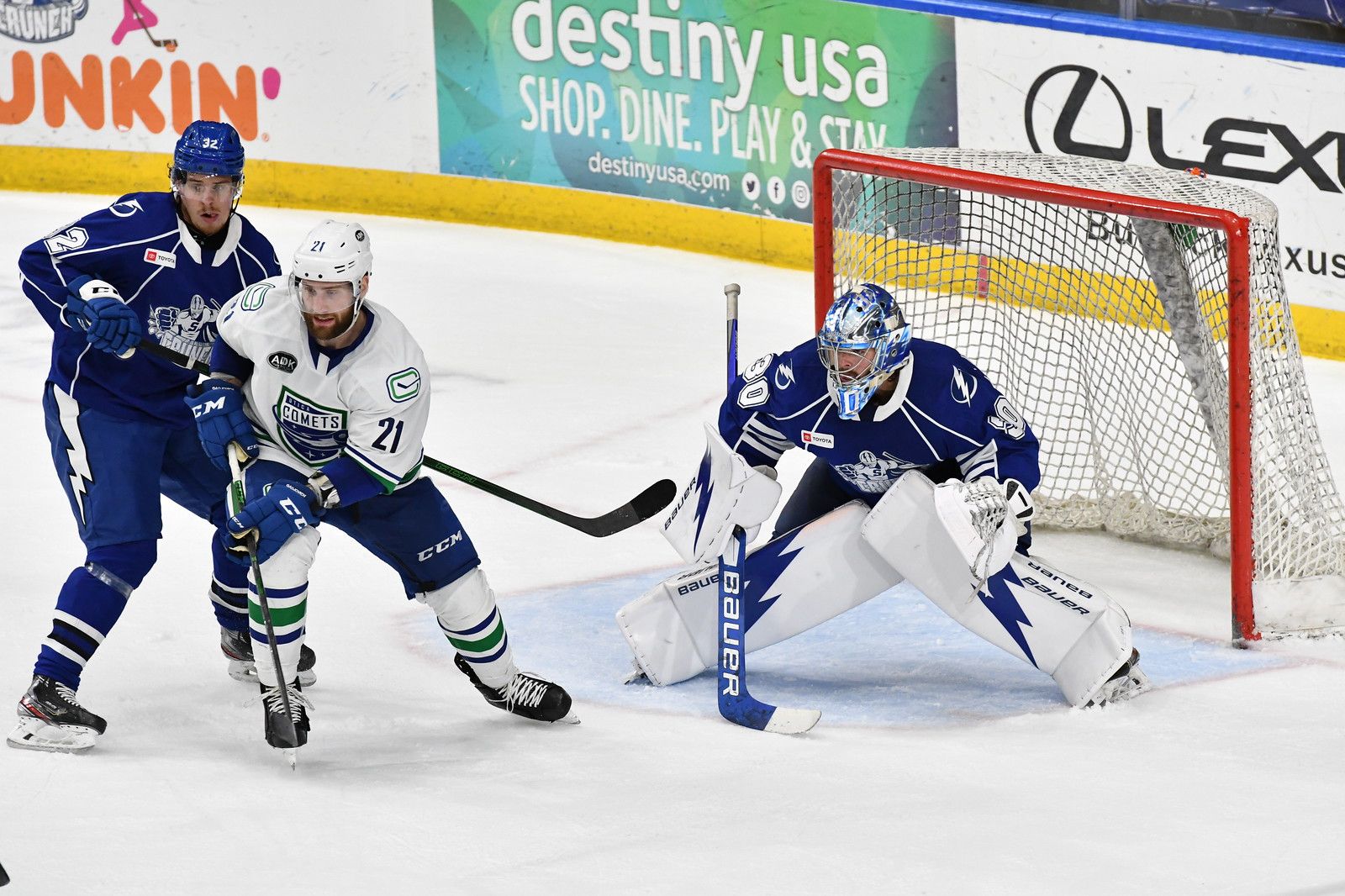 Utica, NY – The battle between the Syracuse Crunch and the Utica Comets went without a goal in the first period but it was a third period explosion of offense by Syracuse that propelled them to a 6-2 win.

The first period was characterized by both goaltenders making excellent saves and in the  second period the offense began. Unfortunately for Utica, it was Syracuse that started the charge. when forward Antoine Morand put the puck just past Comets netminder Joel Hofer as Morand cut to the middle and wristed a shot through a partial screen and inside the far post at 2:31. On the following shift, the Crunch struck yet again to give themselves a 2-0 lead. This time it was Otto Somppi who took the cross-ice pass from Taylor Raddysh. Somppi didn’t hesitate and fired it through the arm and body of Hofer and into the net at 3:06. Later, with Syracuse on the power-play, Grigori Denisenko rifled a one-timer from the left wing side past Hofer and it was the Crunch that skated away with a 3-0 after forty minutes of hockey.

In the final period of regulation, it was Comets leading goal scorer Jonah Gadjovich who finally put Utica on the board. After a failed play to clear the defensive zone by the Crunch, defenseman Josh Wesley kept the puck alive with a point shot. The puck eventually bounced fortuitously right to Jonah Gadjovich who immediately shot it in past the short side of Crunch goalie Spencer Martin. But, the Crunch didn’t waste much time retrieving a three goal lead when Otti Somppi drove the net and redirected the Raddysh pass into the cage helping his team to a 4-1. Later, in the period with the Comets on the man-advantage, head coach Trent Cull pulled Hofer for a six-on-four advantage. It resulted in a glorious opportunity for Lukas Jasek on a one-timer that was thwarted by Martin. As play continued, Andreas Borgman flipped a shot from nearly the length of the ice and into the empty net for a 5-1 lead and a short-handed goal. As the Crunch added a sixth goal from Peter Abbandonato to give them a 6-1 lead the Comets ended the game with one more tally and it was rookie forward Shawn Cameron scoring his first ever AHL goal on a seeing eye shot that found its way in past Martin.

The Comets didn’t score tonight on the power-play while the Crunch struck for two goals on the man advantage in five attempts. The Comets were outshot on the evening 35-29.

The Comets are back in action at home on Wednesday night against Binghamton as the teams face each other for the second time this season. In an earlier game from Newark, NJ, the Comets won the game in a shootout.