The UFC hosted a free news conference inside the 72 Tavern and Grill on Tuesday morning ahead of the highly anticipated UFC Fight Night: Rivera v. Moraes at the Adirondack Bank Center on Friday, June 1.

This was the public’s first chance to see inside the 72 Tavern and Grill, also opening Friday, June 1 for a weekend of great sports including UFC Utica Fight Night, Game 3 of the Stanley Cup Finals and Game 2 of the NBA Finals. 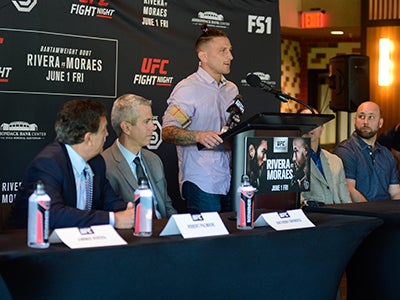 Friday night’s event will be only the 8th UFC event in New York State since its legalization on March 22, 2016.

New York State Assemblyman Joseph Griffo was one of the many elected officials who worked tirelessly to legalize MMA in New York State. "We were very happy the day the Governor signed the bill to legalize MMA,” said Griffo. “It is a great opportunity for athletes to compete in the state of New York and economic benefit."

Marlon Moraes and Jimmie Rivera will headline Friday’s event and promised to both “put on a show” and “entertain [Utica] on Friday night.”

Gregor Gillespie, a native of Rochester, NY is excited to compete in the octagon in his home state once again. "Being able to fight in New York is incredible, it feels good to be home. I want to win for you guys, my people in Rochester and Upstate New York." 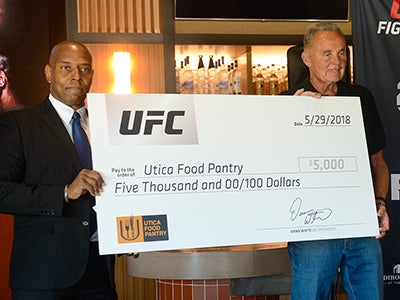 The event concluded with a charitable donation from the UFC to the Utica Food Pantry in the amount of $5000. Russell Brooks accepted the donation on behalf of the Utica Food Pantry, “to have an organization come into town and want to help is really special. Our shelves need this shot in the arm this time of year.”

Tickets for UFC Utica Fight Night are still available by visiting the Box Office at the Adirondack Bank Center between 9am and 5pm or by calling 315-790-9070 or visiting www.empirestatetix.com.