As we close out 2017 we thought we would take a look back at some of the stories that made it a memorable year. 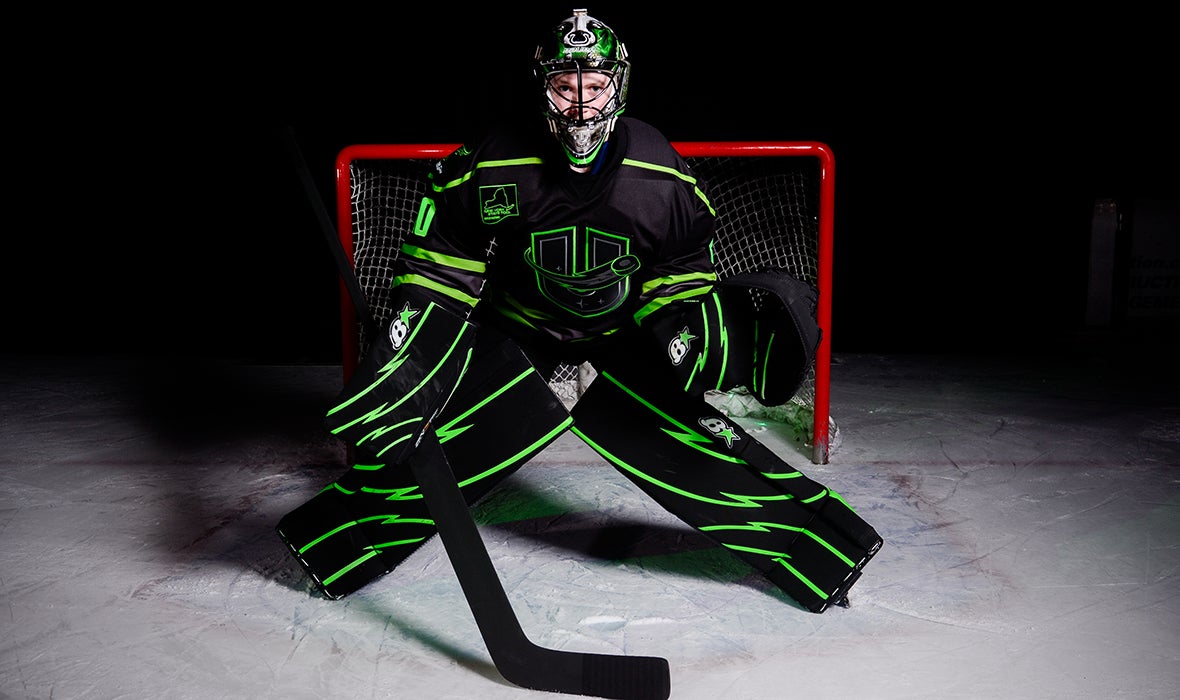 January 28 - The Save of the Day Foundation raised a total of $72,649 in their first Save of the Day Night. Despite a final shootout score of 4-3 in favor of the Syracuse Crunch, the atmosphere in the building was palpable, and even reminiscent of past playoff games held at the AUD

“It was a very special night for both the Utica Comets and the Save of the Day Foundation,” said Esche. “It’s the first time the foundation has ever had its own night and I think our community really came together to support something that will become a tradition for years to come.” 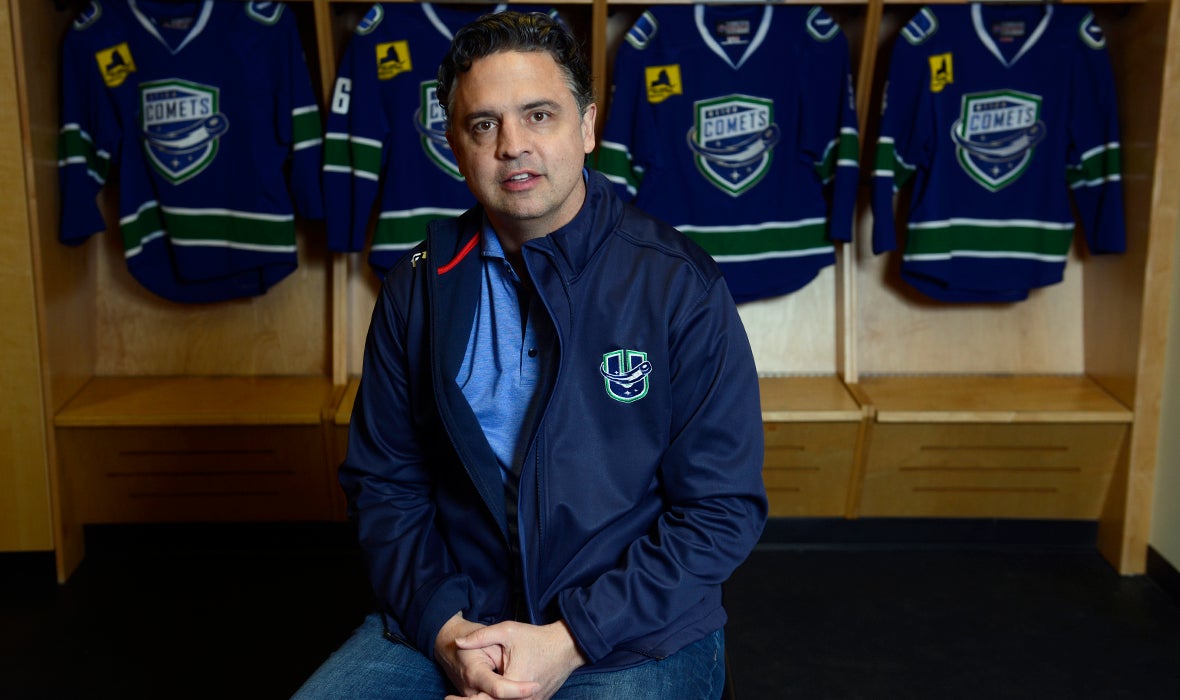 April 26 - Vancouver Canucks General Manger Jim Benning announced today that the team has named Travis Green as Head Coach. Green becomes the 19th Head Coach in Canucks history after being promoted from his role as Head Coach of the club’s AHL affiliate, the Utica Comets.

“Travis is a talented Head Coach who’s played a key role in the development of our young players through four seasons with the Comets,” said Benning. “He has an intense desire to win and build a team identity that is hardworking, responsible on both ends of the ice and competitive. He has an excellent understanding of where we are as an organization and we’re confident in his ability to help build our team and develop a winning culture. We’re pleased to welcome Travis and his family and we are truly excited about the future.” 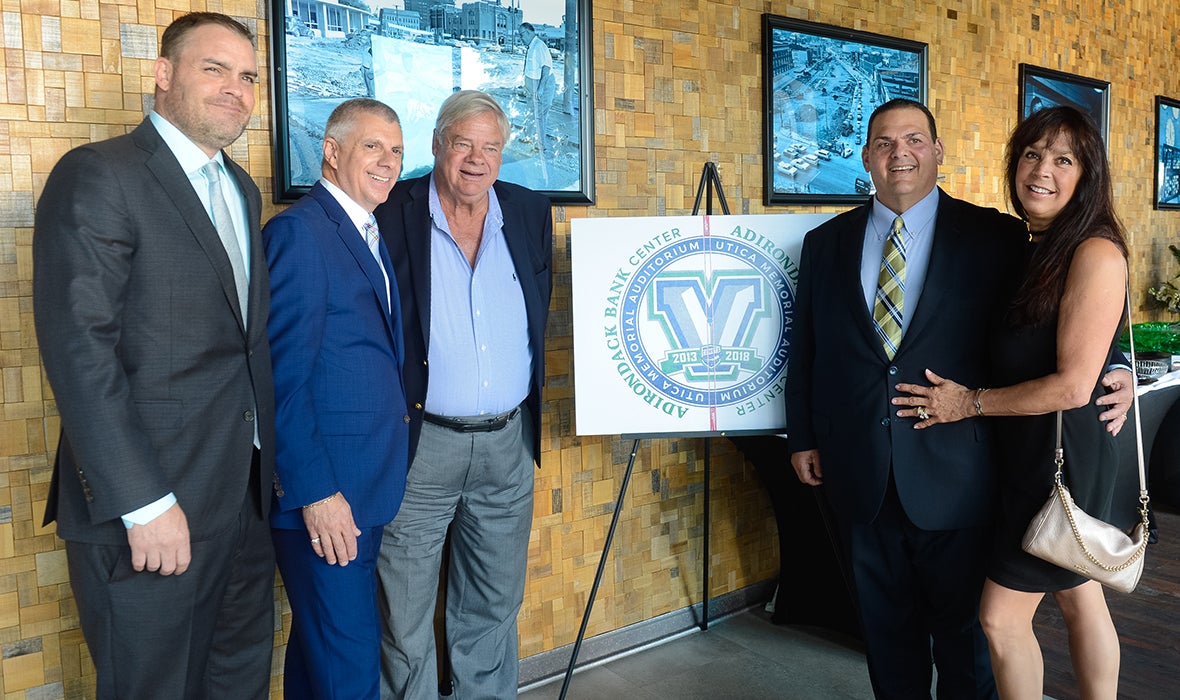 September 27 -Oneida County Executive Anthony Picente announced the 10-year, multi-million-dollar naming rights partnership between The AUD Authority and Adirondack Bank, amending the name of The AUD to the Adirondack Bank Center at the Utica Memorial Auditorium. The naming rights deal is the first in the history of the venue, which was erected in 1959 and exists today as a National Historic Engineering Landmark.

“The new name and partnership with Adirondack Bank are a reflection of the growth and transformation that The AUD has experienced in recent years,” said Oneida County Executive Anthony J. Picente Jr. “The rebirth of the AUD has been one of Oneida County’s premier success stories, and the local partnership announced this week is a testament to just that.” 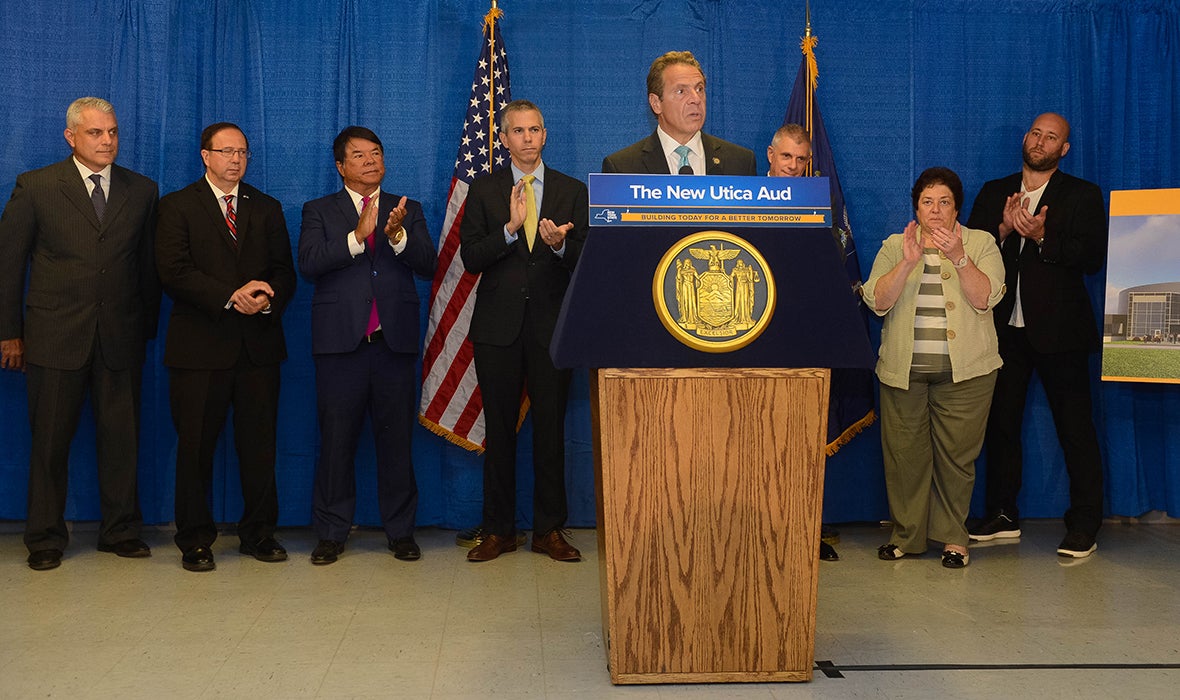 September 28 - In conjunction with Governor Cuomo, Chris Nikolis, Executive Vice President of Marketing and Business Development with the American Hockey League, surprised the crowd by revealing that Utica is to host the 2018 AHL All-Star Classic, Presented by Turning Stone Resort Casino, on January 28 and 29, 2018. This will be the second time that Utica, and the newly-named Adirondack Bank Center at the Utica Memorial Auditorium, have hosted the two-day event, which brings in representatives from all 30 teams to face off in both a seven-part skills competition and a round-robin 3-on-3 all-star tournament, where the teams are divided up by its four conferences. The Comets and The AUD hosted the same event in 2015, which was a massive achievement, thanks in large part to the help of Turning Stone.

Nikolis spoke to both Utica’s successful sellout streak and their fan base, as well as the connection to the West End Expansion Project.

“I can attest to the fact that the Comets have transformed an area, built a loyal fan base, and been a great league partner since their inception,” Nikolis explained. “We had a truly great event here in 2015, and that blueprint will allow us to not only match 2015’s event, but far surpass it.” 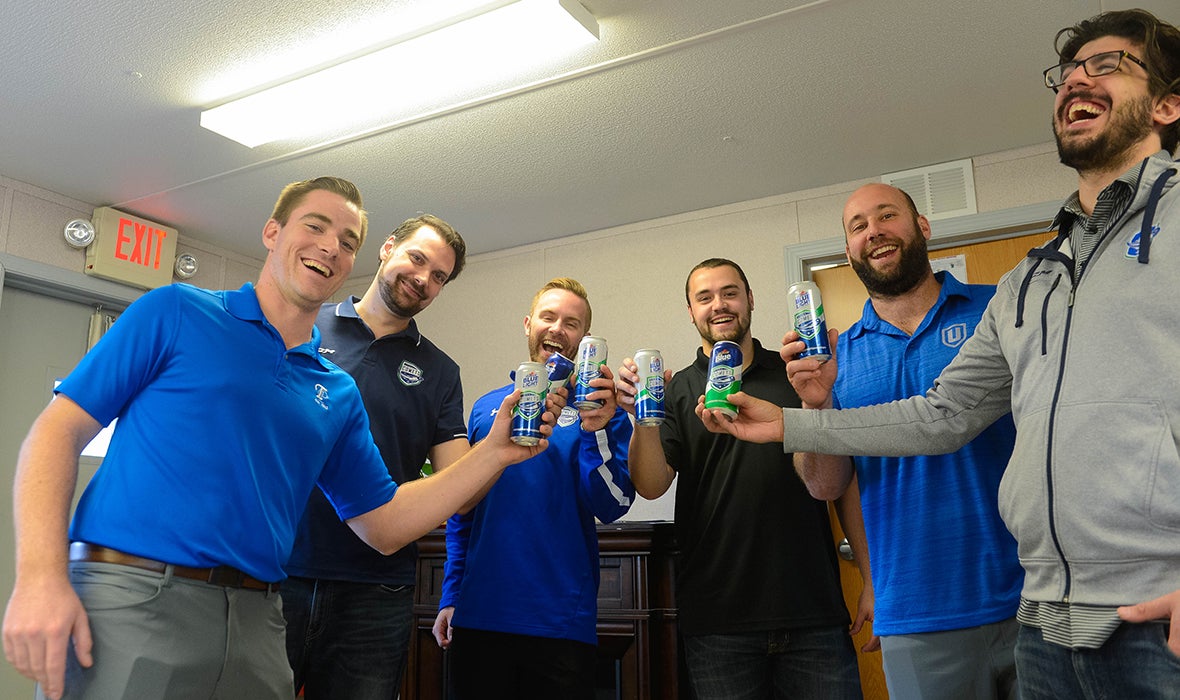 “The reveal of the Labatt Blue Comets cans is a great way to kick off the fifth anniversary season,” said Utica Comets President Robert Esche. “McCraith has always been a valuable sponsor to the Comets brand, and this can design takes the partnership to another level. I’m extremely excited to enjoy these cans with the rest of Comets fans throughout the Mohawk Valley this season.” 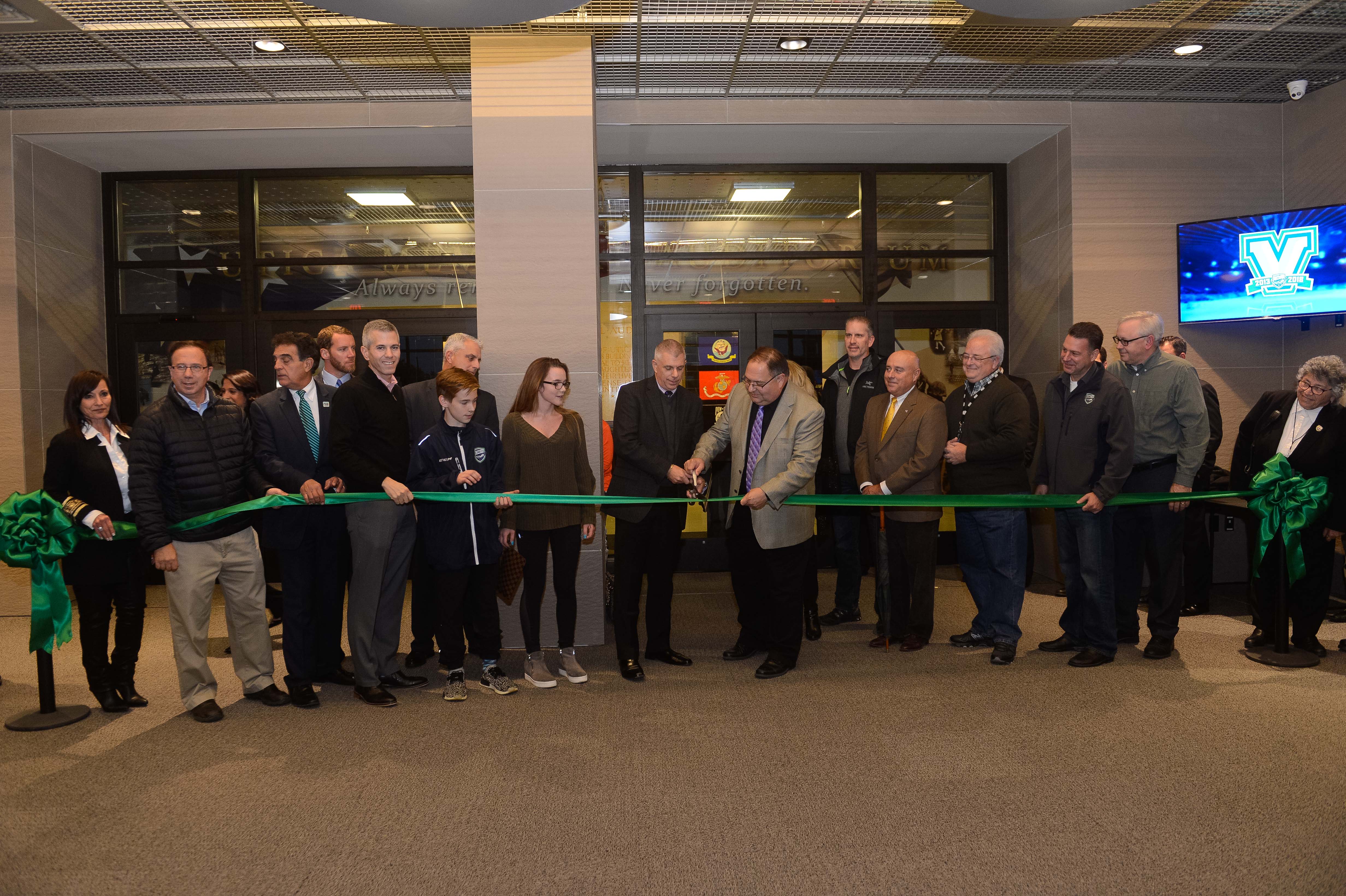